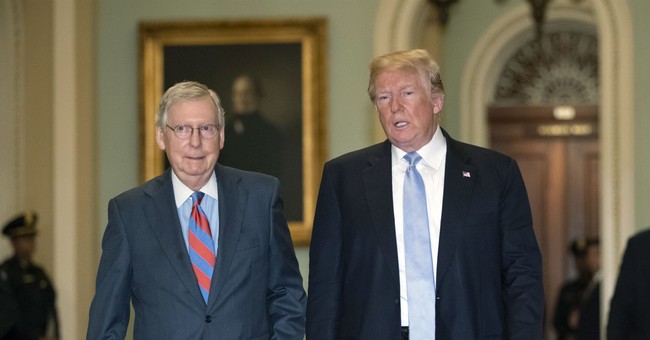 Sen. Cory Gardner (R-CO) must be feeling good. After the vicious fight over Judge Brett Kavanaugh, who was confirmed to the Supreme Court earlier this month, the GOP finally got the levels of engagement Republicans had been hoping for this midterm cycle. The Democrats lobbed a last minute Hail Mary at the nomination, dredging up baseless and unsubstantiated sexual misconduct allegations from three women, who couldn’t remember key details, one of which wasn’t even sure if Kavanaugh was present at a college party where he allegedly exposed himself. Everything was hurled against the wall at this man. These shoddy allegations, he drank beer…in college (the horror!), his temperament, and a host of extraneous criticisms.

For me, part of the Left’s opposition was that they couldn’t stand another conservative Irish Catholic on the bench, so the ugly stereotypes of old (i.e., he’s a raging sexually abusive alcoholic) reared its ugly head. Either way, conservatives, especially Republican women, were furious at this character assassination attempt. As for his temperament, how would you feel if someone with no evidence accused you of being part of a gang rape ring? Rest assured for whomever the Democrats nominate to the Court, we’ll be waiting in the tall grass, ready to get our scalp—and we should. I would like to thank the Democrats once again for establishing this precedent. It’s war, but back to the 2018 Senate elections.

Gardner and the National Republican Senatorial Committee must have some solid internals because they’re predicting an increased Senate majority of 55 seats heading into the next Congress. Virtually, all the red state Democrats, except for Manchin in West Virginia and Jon Tester in Montana, are expected to be picked off, with Marsha Blackburn, Dean Heller, and Martha McSally holding the line in Tennessee, Nevada, and Arizona respectively.

In Nevada, Heller has eked out a two-to-seven point lead in the latest series of polling over Rep. Jacky Rosen. Emerson has him up seven, but NBC and NYT polls have him two points ahead, which is roughly the margin of victory Heller secured in his 2012 race. Las Vegas will always make this state competitive due to the enclave of pro-Democrat, pro-union workers, but this is very, very good news. Gardner did say that some campaign resources should be deployed in Arizona and Nevada, however (via Politico):

Gardner’s sunny outlook envisions a Republican majority as brawny as 55 seats, a number that could put the GOP in the majority for years to come. Republicans currently control 51 seats.

With so many competitive races coming down to the wire in red states won handily by President Donald Trump, the National Republican Senatorial Campaign Committee chairman predicted GOP challengers would oust Claire McCaskill in Missouri, Joe Donnelly in Indiana, Bill Nelson in Florida and Heidi Heitkamp in North Dakota, as well as protect vulnerable GOP Sen. Dean Heller in Nevada and open seats in Arizona and Tennessee. All those races are tight according to the polls, save GOP-leaning North Dakota.

Gardner also said that GOP attempts to oust Montana Democrat Jon Tester and West Virginia Democrat Joe Manchin are difficult but still winnable. Both those senators are narrowly favored for reelection. He said GOP candidates are in strong financial shape over the closing stretch, though he did say Martha McSally in Arizona and Heller in Nevada could both use financial help.

Sen. Heidi Heitkamp (D-ND) won her 2012 race by less than 3,000 votes, but I thought she could surprise us again and barely win re-election. Now, she’s cooked. It’s not just that she’s trailing Republican Rep. Kevin Cramer by nearly double-digits now, it’s also because she made the epic and unforced error of outing sexual assault survivors in an ad aimed at her Republican opponent, who made some controversial remarks about the sexual misconduct allegations directed at Kavanaugh during his confirmation fight. The problem: not every woman in this open letter ad was a victim of sexual assault.

More importantly, a great many of them never authorized their names to be released publicly. The Heitkamp campaign apologized and ran another ad where it tried to own up to the error, though it might have violated FEC regulations because Heitkamp’s political committee never included that they paid for it. With Election Day so close, less than 20 days, there’s not much she can do to save her re-election or turn this around in any meaningful manner. What about 2020 for Democrats? Oh yeah, it’s still a terrible map:

Republicans took over seats in Alaska, West Virginia, South Dakota, Montana, Louisiana and Arkansas in 2014 that will be difficult if not impossible for Democrats to wrest back, leaving them to concentrate on defeating senators in purple states like Gardner and GOP Sens. Thom Tillis of North Carolina, Joni Ernst of Iowa and Susan Collins of Maine.

Just one Democratic senator appears in serious peril in 2020: Doug Jones of Alabama.

And I have no doubt that we could hold all three.