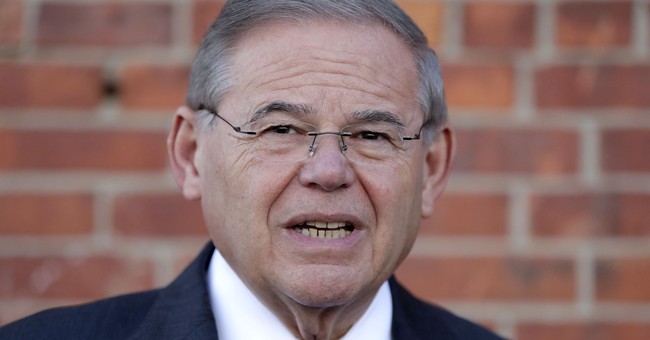 Sen. Bob Menendez (D-NJ) is not doing so hot, especially in a deep blue state where there are nearly a million more registered Democrats than Republicans. This should be a slam dunk, but Republican Bob Hugin, who has spent more the 30 million of his own wealth, is making sure New Jersey voters know it’s time for a change, and that Menendez is a corrupt sleazebag.

The negative ad assault has been pervasive, and state Democrats can’t seem to mount an effective defense. Menendez’s favorability is dismal, barely breaking 20 percent. New Jersey Democrats say that there aren’t many competitive House races this year, which mean a large swath of reliable voters will probably stay home. That’s the issue: Menendez is such an unfavorable character that even Democrats aren’t enthused to give him another term, despite the anti-Trump hysteria that’s engulfing the Democratic Party. No, post-summer bump came for Menendez, and with polls showing Hugin catching up big league; Jersey Democrats are starting to sweat bullets (via Politico):

New Jersey Democrats are growing increasingly worried that Sen. Bob Menendez could lose his seat next week in an outcome that would undercut the party’s effort to take back the Senate.

Democratic strategists working on races across the state said in interviews that they have seen a remarkable decline in support for Menendez as his Republican opponent — former pharmaceutical executive Bob Hugin — poured $36 million of his own wealth into his campaign. Hugin has used much of the money to run a seemingly endless stream of negative campaign ads. Even as public opinion polls show the senator up by double digits, some insiders say a post-summer boost, hoped for by team Menendez, never arrived.

As Menendez’s aides insists they’re “confident” he’ll win, some allies are openly admitting things may not turn out as planned, saying the massive advertising campaign on the other side has been difficult to overcome.

One of the ads, “Her,” shows a woman holding a baby girl as images of disgraced Hollywood mogul Harvey Weinstein flash on a TV screen. A female narrator describes the accusation and, as an image of Menendez appears on a tablet computer with the baby in the background, declares, “I’ll never be able to explain a vote for him, to her.”

The weaponization of the allegation in the final weeks before the election has made it difficult for Menendez to fight back against the attack, which he labeled the “desperate” act of a “slimeball” and a “liar.”

Months of ads had reminded voters about the trial in which Menendez was accused of carrying out official favors for a Florida eye doctor — now a convicted Medicare fraudster — in exchange for campaign cash, private jet flights and lavish Dominican vacations.

Some Democratic operatives say there’s no doubt the attacks have worked. One strategist said Menendez spent the month of October “trying to hold on and just trying to survive.”

“They’re running a very, very, very good campaign, and Menendez seems to be just hoping this is over,” the second Democrat said. “I think there’s a significant chance he could lose.”

…There’s clear distaste for Menendez among many of those surveyed, with just 23 percent in the latest Stockton poll saying they have a favorable view of him and 44 percent having an unfavorable view. Such feelings were expressed in the June primary when Menendez’s unfunded and virtually unknown Democratic challenger, Lisa McCormick, got 38 percent of the vote and won several rural counties.

One problem for Menendez is that some of the largest concentrations of Democratic voters are located in congressional districts that don’t have competitive House races. Those include Newark, Jersey City, Paterson and Elizabeth — the state’s largest cities.

Without a competitive House race to worry about, there’s a fear some voters may stay home.

As a New Jersey native, the state has seen its fair share of corruption. New York Magazine noted that this election would test the state’s tolerance for sleaze. We’ll see what happens, but if Hugin manages to pull this off—he’d be the first GOP senator elected since 1972.

Menendez was the subject of an 11-month long corruption case, where he was accused of accepting lavish gifts from his friend, Dr. Salomon Melgen, in exchange for using his office to benefit Mr. Melgen. The case ended in a hung jury for Menendez. For Melgen, he was sentenced to 17 years for health care fraud. The Senate Ethics Committee, however, torched Menendez and it could cost him his job tomorrow.