Opposition Media Flop: No One Cared About That Massive NYT Story On Trump's Taxes...No One 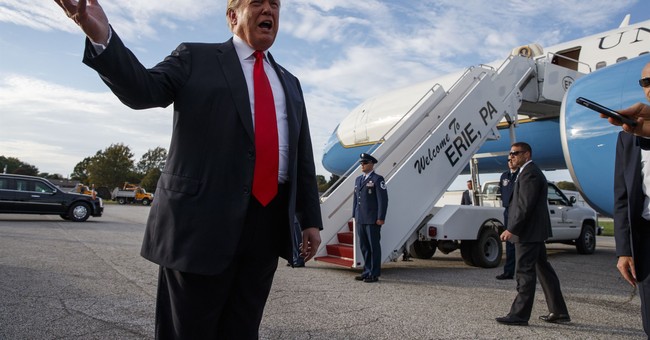 Gee—where did that story go? I’m talking about The New York Times story about President Trump’s tax schemes that supposedly was…very, very bad. Oh, that’s right; no one cared. It’s the bombshell that never was, partially because tax law is boring. Politico covered why this story went nowhere in the national news media, even after they ran it twice last week. The publication added that there is nothing juicy and that tax law is so complex that we often dole out filing our taxes to accountants. There are no Russian hookers, collusion nonsense, or anything about the president’s alleged mistresses.

Okay—admittedly, even if Trump cheated on his wife, I wouldn’t care. A billionaire had affairs…and we find this shocking? It’s also an insanely long piece loaded with things that average voters just don’t care about. Also, no one likes paying taxes, and taking measures to reduce your tax burden is not illegal. Only insufferable, overly educated liberals from Hillary land gave a crap—and even they’re not enough in number to make people care. The Times combed through 100,000 pages of documents and conducted scores of interviews—and it was all done for nothing. Oh, and maybe the fact that a vicious Supreme Court fight also took over the news cycle:

The piece stirred both New York City and state regulators to commence investigations of their own that could ensnare the Trump family in years of consuming legal battles and force them to choke up hundreds of millions in fines and penalties. But even though the Times aggregated this piece for slow readers, produced clever video takes on the material and reprinted the original as a special section of the Sunday paper, the story has all but melted from sight. White House press secretary Sarah Huckabee Sanders called it “very boring,” as did Trump. By the time the pundits convened on the big Sunday political shows, the story was a goner—according to Matt Gertz at Media Matters, none of the shows covered it. (State of the Union mentioned it in passing; Joy Reid had a segment; and CNN’s press show, Reliable Sources, interviewed one of the Times authors.)

Taxes are so painfully complex that most of us outsource our own filings to an accountant or a piece of software. Sure, the Trumps might have swindled various tax collectors out of hundreds of millions, but even devoted followers of the news have trouble following a narrative dealing in grantor-retained annuity trusts, illegal loans, dubious gifts, and fraudulent mark-ups of expenses. If only Trump had robbed a bank!

The Times story was also undercut by Trump’s willingness to own what he did. He’s repeatedly grinned when asked about his low tax bills and said they only prove how smart he is. In his formulation, theTimes exposé is just the death rattle of a dying newspaper. In his lawyer’s words, the Times piece is “100 percent false, and highly defamatory.” Here, Trump is taking his own advice on what to do when accused of assaulting women: “Deny, deny, deny.” And in the short term, it seems to be working! Three days after the Times investigation ran, the paper’s top political reporter, Peter Baker, called the week the “best” of Trump’s presidency.

Another reason the story might not have entered the nation’s bloodstream is that it contained too much for anybody—outside of the most committed—to read in a single sitting. Perhaps if the Times had chopped its monster into three installments, as many newspapers do with Pulitzer-Prize fodder, it might have grown legs and combined with all the other Trump scandals to enter the national conversation.

What was Politico’s other solution to keeping this story alive and building it in the news cycle? Maybe they should’ve given other publications slices of the story to build upon.

Perhaps the Times should have distributed some of the building blocks of its tax story to the Washington Post, the Wall Street Journal, the Los Angeles Times, Politico and the Daily Beast before it published its magnum opus so that they could have done their own takes to give the story additional momentum. I’m not suggesting that the Times should have done as Bastian Obermayer did with the Panama Papers and given its documents to a consortium for greater distribution to other news organizations. But by sharing a small taste of what he had with other papers, New York Times Executive Editor Dean Baquet could have amplified the story and perhaps turned up new leads that would benefit the Times.

How about it, Dean? I’m not ordinarily a big fan of collaborative efforts, but this story is too good for us to allow it to vaporize.

It was an NYT exclusive report. Then again, no one cares about tax laws. Americans overall pretty much view the IRS with disdain and it would’ve been more expansive reporting on a story that seemed to be dead in the water anyway because of the SCOTUS fight. It’s not like we don’t know Donald Trump isn't an angel or some moral light. He’s not. He’s the embodiment of politics whether people what to admit it or not. There’s doing the right thing and winning—you cannot have both. The GOP wanted to win. The GOP needed to stop Hillary Clinton. Trump came out on top, and so far, he’s been governing more conservatively than any skeptic, myself included, had predicted. In the meantime, the Left and the elite news media have gone so far overboard that they’ve pushed me hardcore into the MAGA camp, which will soon be the Keep American Great camp. So, keep up with these stories, NYT. You’re only helping us.