Thank You, Jeff Sessions: New Mexico Terror Suspects Who Were Released Have Been Arrested By The FBI 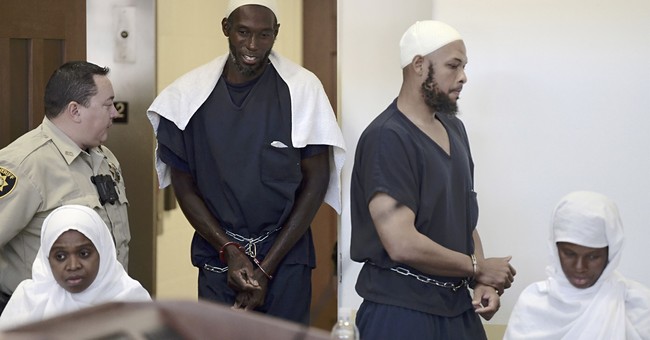 Well, I guess thanks are in order for Attorney General, even if he didn’t order it per se, his Justice Department did the right thing last night. The FBI arrested the five New Mexico terror suspects on gun and conspiracy charges. The five had been released because prosecutors botched the 10-day rule in which they needed to present evidence for the preliminary hearings (via Fox News):

The FBI announced Friday that it had arrested all five New Mexico compound suspects, days after multiple charges were dropped. The suspects were now being charged with violating federal firearms and conspiracy laws.

"The defendants, Jany Leveille, 35, a Haitian national illegally present in the United States, Siraj Ibn Wahhaj, 40, Hujrah Wahhaj, 37, Subhanah Wahhaj, 35, and Lucas Morton, 40, are charged in a criminal complaint that was filed earlier today in the U.S. District Court for the District of New Mexico," the bureau said in a statement.

Child abuse charges against them were dropped because prosecutors missed the 10-day limit for an evidentiary hearing to establish probable cause.

Earlier this month, authorities raided a compound, where five adults and 11 children were found. The conditions of the camp were terrible. One child was found dead. The children were being trained to commit mass shootings, targeting schools and hospitals.  The de facto leader Siraj Ibn Wahhaj is the son of one of the unindicted co-conspirators of the 1993 World Trade Center bombing. He was also being held on a warrant from Georgia. He allegedly kidnapped his son from the state, whose investigation led police to the compound. Siraj’s is reportedly the dead child found on the ground. Judge Sarah Backus earned the ire of the public for allowing them to be released on $20,000 bond. She has a history of setting low-bail for violent offenders, but has since recused herself from the case. All five had their charges, including child abuse resulting in death charges filed against Siraj, droppedlast Wednesday. Siraj reportedly kidnapped his son, who had mental health issues, to perform an exorcism on him. It took a few days for the body to be confirmed as Siraj’s son, who died during this exorcism ritual.