Oh, So MSNBC's Tur Thinks This Is The Reason Why Brennan Got His Security Clearance Stripped By Trump 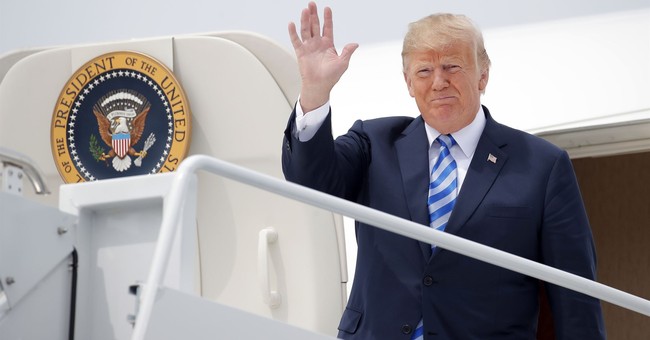 You know when it comes to a wrong take on things, you can always count on MSNBC. To keep liberal blood pressures low, they’ll say just about anything. They’ll marginalize journalists who don’t drink the progressive Kool-Aid, they’ll cheer at the prospect of an economic recession hurting Trump, and they’ll defend themselves questioning whether bonus checks to working families of $1,000 or more is significant to these people. Spoiler: it is—only Democrats seem to think that extra money in the pockets of working people is worthless, unless they can get some credit, which they can’t because they all opposed the Trump tax cuts. You know, the legislation that set the foundation for our booming economic growth.

Certainly will move the Omarosa news down the rundown. https://t.co/FHyqMaWvUk

Yesterday, the media went into meltdown mode because Obama’s former CIA director, John Brennan, got his security clearance revoked. MSNBC’s Katy Tur thought this was done to keep the Omarosa Manigault news out of the spotlight, or something, because President Trump allegedly uttered the n-word. There’s no solid evidence that he did. Also, this is coming from Omarosa. Her credibility is shot. She took secret recordings inside the White House, including the Situation Room. This is profoundly disturbing. But this isn’t the reason for why Trump axed Brennan’s clearance—it should have been done a long time ago. Twitchy listed the reasons, namely that Brennan is the story from which you could attack this White House effectively:

There are several problems with the theory that team Trump did this for that purpose:

TWO — Why would Trump need to distract from the Omarosa news when just about every single person in America does not ascribe any credibility to the former reality television star?

Yes, with Omarosa, her credibility is next to nothing. That helps Trump! Even prominent anti-rump media personalities and outlets are attacking her, saying she can’t be trusted—despite her saying what liberals love to say about Trump; specifically that he’s mentally unstable. Why? Oh, well, it's becasue he's drinking too much soda (you’ve got to be kidding me, lady). Twitchy noted that even Slate wasn’t having any of Omarosa’s nonsense:

Omarosa Manigault Newman is on the talk-show circuit this week to promote her forthcoming book, Unhinged: An Insider’s Account of the Trump White House, which promises salacious details about the administration’s inner workings. The biggest revelations so far have to do with three recordings: a rumored Apprentice-era tape of Donald Trump saying the N-word; a tape of chief of staff John Kelly firing Manigault Newman in the White House Situation Room, where recording devices are typically prohibited; and a recording of a phone call in which Trump claims he didn’t know she’d been fired.

Manigault Newman claims to have heard the N-word recording, though her book says she only heard about it from a few people in the know. The other two tapes are Manigault Newman’s own—she made them, and she’s been broadcasting them strategically in advance of her book’s Aug. 14 release date. She played the Kelly recording on Meet the Press on Saturday and the Trump recording on the Today show Monday morning, and anonymous White House officials told ABC News that they believe she has even more tapes, perhaps recorded with some kind of audio-capturing pen.

But even if Manigault Newman and her tapes say exactly what the president’s opponents want to hear—that he’s a racist, that he’s a bumbling idiot, that he has no control over his own White House—her “insider’s account” will never be as satisfying as the anti-Trump resistance might hope. The first problem is the source. Manigault Newman, like the president, is an opportunist built for and by reality television. Her willingness to do anything for notoriety, including but not limited to playing the villain on a corny game show and signing up for a role in a racist presidential administration, makes her an unreliable narrator.

Yeah, so, I’m not so sure this was done to push down the Omarosa news. There's nothing damaging. It's crazy talk, and it'll flame out eventually.