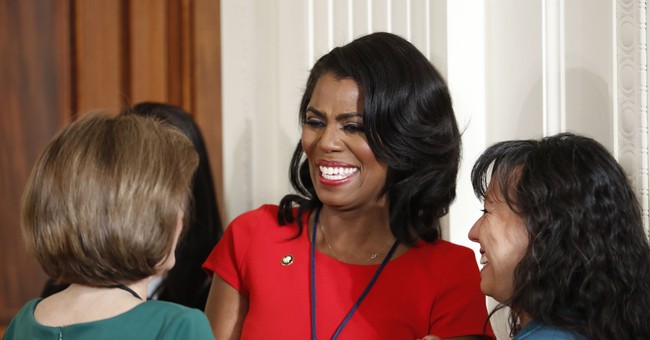 Well, Omarosa Manigault, the former director of Communication for the Public Liaison’s Office, has landed in potentially hot legal water. She secretly taped some conversations within the Trump White House, including the Situation Room. Now, will she be in legal hot water concerning national security? Maybe not—though Axios’ Jonathan Swan said lawyers in this field believe this incident is still disturbing:

It's extraordinary enough to secretly record a White House colleague and then play the tape on television. But it's even more stunning that the conversation happened in the Situation Room — the most secure area in the West Wing, reserved for the most sensitive conversations, many of them dealing with highly classified intelligence.

Behind the scenes: I spoke to several Trump officials who've spent time in the SitRoom. They say Kelly and the White House lawyers — especially Uttam Dhillon, who was recently appointed to head the Drug Enforcement Administration — used the SitRoom to talk with staff they were accusing of serious breaches, including problems with their clearances.

You have to lie and intentionally subvert the rules to get a recording device into the SitRoom, which is actually a group of several secure meeting rooms.

The bottom line: Omarosa says Kelly threatened her and she made her secret recording to protect herself. And to be clear: the conversation was not classified, meaning she may not have broken federal law. But national security lawyers I've spoken to say it’s nonetheless disturbing.

It’s unprecedented, but also perfect to drum up buzz for her upcoming book. Oh, and apparently she allegedly heard President Trump use the n-word. Well, this aspect would be a story, but she has a credibility problem, a massive one--everyone is saying it.

Axios added that by all accounts, people were terrified of her during her 12-month tenure, in which she did little work that actually meant anything:

"I'm scared sh**less of her... She's a physically intimidating presence," a male former colleague of Omarosa's told me. (He wouldn't let me use a more precise description of his former White House role because he admitted he's still scared of retribution from Omarosa. Other senior officials have admitted the same to me.)

"I never said no to her," the source added. "Anything she wanted, 'Yes, brilliant.' I'm afraid of her. I'm afraid of getting my ass kicked."

The big picture: Trump has nobody to blame but himself for Omarosa's raucous book tour, in which she calls him a racist and a misogynist, and says he's in mental decline. Trump brought her into the White House at the senior-most level with the top salary. In many ways, two former senior administration officials pointed out, what Omarosa is doing now is pure Trump.

"She may be the purest of all the Trump characters," one told me. "She may be the most Trumpian. She knows media, she knows about physical presence, like Trump does...that's why I think he's rattled."

"The only reason Trump works is because he gives less of a crap than anybody in the world," the other source told me. "That's where she's at.

She's totally undeterred by things that would freak out most people.

"She's out-Trumping Trump right now," the source added, before losing his train of thought in a fit of laughter.

The bottom line: By all accounts except her own, Omarosa Manigault-Newman did little substantive work during her almost 12 months in the White House. But for much of her time there, she maintained decent access to Trump. And while the White House is now dumping on her credibility — and in many cases they have solid ammunition — the reality is that she only got the tapes because she was in the room.

So yeah, maybe this wasn’t the best hire, but the Trump campaign now wants to take her to court for violating that non-disclosure agreement  (via Daily Mail):

President Donald Trump's re-election campaign organization is considering filing a breach of contract lawsuit against Omarosa Manigault-Newman, responding to what a campaign official says are 'ongoing' violations of a non-disclosure agreement the former White House aide signed in 2016.

The official, who requested anonymity in order to speak freely, told DailyMail.com that other campaign aides who are mentioned in Manigault-Newman's memoir, on sale Tuesday, also have initiated discussions with the campaign about filing defamation lawsuits of their own.

The non-disclosure agreement, the official added, specifically prohibited her from publicly disparaging Donald Trump at any time after she signed it, and 'she's violating it right now.'

Now, the good news for Omarosa is that the NDA might not be constitutional (via USA Today):

Trump’s feud with Omarosa Manigault Newman, the former White House staffer publishing a book critical of the president, reignited a debate about the use of nondisclosure agreements to bar aides from discussing the administration.

If Manigault Newman or other former White House officials accepted a job working for the Trump campaign or political groups supporting the president, they could be subject to an NDA since those organizations are private entities.

The Trump administration required at least some aides to sign an NDA but White House attorneys privately acknowledged they were unenforceable, according to a report in The New York Times earlier this year. The agreements, unnamed officials told The Times, were intended to placate a president wrestling with a barrage of leaks.

In the meantime, Trump has fired multiple salvos at his former aide.

While I know it’s “not presidential” to take on a lowlife like Omarosa, and while I would rather not be doing so, this is a modern day form of communication and I know the Fake News Media will be working overtime to make even Wacky Omarosa look legitimate as possible. Sorry!

...really bad things. Nasty to people & would constantly miss meetings & work. When Gen. Kelly came on board he told me she was a loser & nothing but problems. I told him to try working it out, if possible, because she only said GREAT things about me - until she got fired!