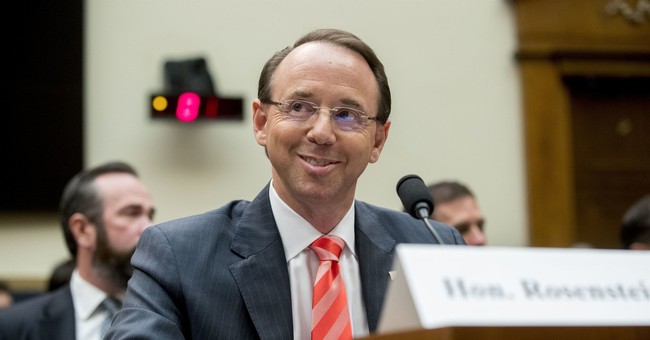 Well, for House conservatives, they’ve had it with Deputy Attorney General Rod Rosenstein. It’s the boiling point of a months-long struggle between Congress and the Department of Justice over document disclosures. The DOJ had reportedly failed to comply with subpoenas for documents relating to the firing of former Deputy FBI Director Andrew McCabe, the Hillary Clinton email probe, and the alleged Foreign Intelligence Surveillance Act (FISA) abuses. Around 1.2 million pages of requested documents have yet to materialize. In April, Rep. Devin Nunes, chair of the House Intelligence Committee, threatened to impeach FBI Director Chris Wray and Rosenstein for not turning over a two-page brief that supposedly set of the FBI’s counterintelligence probe into possible collusion between the Kremlin and the Trump team during the 2016 election.

Special Counsel Robert Mueller is now heading that probe. In May, The Washington Post reported that the House Freedom Caucus had drafted articles of impeachment as a last resort. Last night, with continued delays from the DOJ, articles of impeachment have been drawn up. Rep. Mark Meadows (R-NC), leader of the House Freedom Caucus, made his reasons known on social media (via Fox News):

I just filed a resolution with @Jim_Jordan and several colleagues to impeach Rod Rosenstein. The DOJ has continued to hide information from Congress and repeatedly obstructed oversight--even defying multiple Congressional subpoenas.

We have had enough.

Over the last 10 months, we've caught the DOJ:

Just to name a few examples.

Enough is enough. People need to be held accountable.

The impeachment articles accuse Rosenstein of intentionally withholding documents and information from Congress, failure to comply with congressional subpoenas and abuse of the Foreign Intelligence Surveillance Act (FISA).

The articles were introduced by Reps. Mark Meadows of North Carolina and Jim Jordan of Ohio, the chairman and a prominent member of the conservative House Freedom Caucus.

In an exclusive interview on Fox News' "The Ingraham Angle" on Wednesday night, Meadows said it would be possible to effect a so-called "privileged" resolution on impeaching Rosenstein as early as Thursday morning, which would require a vote within two days -- although the impending House recess would likely delay that vote unless it were held quickly.

Both Meadows and Jordan told host Laura Ingraham the effort was long overdue.

"For nine months, we've asked for documents, and that's all we want," Meadows said. "Not only have subpoenas been ignored, but information has been hidden, efforts have been stonewalled."

"We've caught the Department of Justice hiding information, redacting information that they should not have redacted," Jordan charged, adding that Rosenstein had attempted to intimidate House staffers with subpoenas.

Yes, those reported threats from Rosenstein to GOP staffers and lawmakers on a House committee came in June. It was the typical government back-and-forth, with the deputy attorney general saying he could subpoena records from those investigating him. It added more drama. Democrats went ballistic, noting that this was an effort to derail the special counsel’s investigation into possible collusion, though Rosenstein has told President Trump that he has nothing to fear with this investigation. Talk is cheap, and Rosenstein, despite telling the president this, has been ready to receive his pink slip from the Trump White House, with zero regrets in how he has conducted himself as DAG.

In principle, yes, the DOJ has been absurd concerning document disclosures—and GOP lawmakers are rightfully frustrated, but it Impeachment Theater could yield more headaches and energize progressives, already jacked with resistance fever for the 2018 midterms. We’ll see what happens. One thing that will happen, which will be entertaining, is that the liberal media will have another meltdown. We may be a dictatorship already…in the minds of those at MSDNC and others. It depends on what narcotic they’re on at the time.