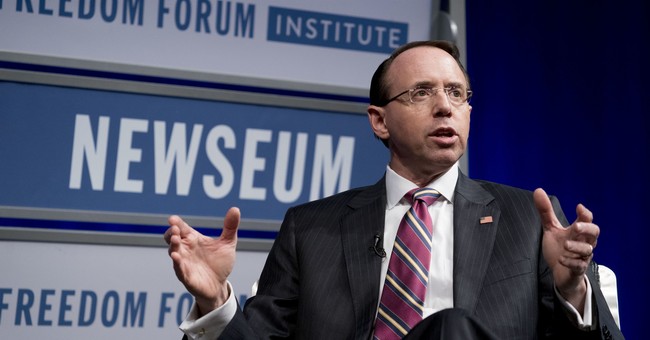 UPDATE: CNN is reporting that things have escalated in the conflict between Congress and the DOJ. Deputy Attorney General Rosenstein is preparing to launch an internal investigation into the staffers who allege that he threatened to subpoena their records should he be held in contempt of Congress. House Republicans have grown increasingly impatient over the DOJ’s lethargic pace in disclosing documents relating to inquiries into the Trump-Russia investigation. The DOJ has denied that Rosenstein threatened anyone:

Deputy Attorney General Rod Rosenstein's ongoing battle with House Republicans reached new heights Tuesday, as the No. 2 senior leader of the Justice Department plans to call on the House to investigate its own committee staff.

Rosenstein has butted heads with House Intelligence Chairman Devin Nunes for months over a subpoena for documents related to the Russia investigation, but the battle spilled out into public view Tuesday after Fox News reported staff on the committee felt "personally attacked" at a meeting with Rosenstein in January.

Justice Department officials dispute the recounting of the closed-door meeting detailed in the story, and Rosenstein plans to "request that the House general counsel conduct an internal investigation of these Congressional staffers' conduct" when he returns from a foreign trip this week, DOJ said.

"The Deputy Attorney General never threatened anyone in the room with a criminal investigation," a Justice Department official said. "The FBI Director, the senior career ethics adviser for the Department, and the Assistant Attorney General for Legislative Affairs who were all present at this meeting are all quite clear that the characterization of events laid out here is false.

Deputy Attorney General Rod Rosenstein reportedly threatened to subpoena the emails and phone records of investigating GOP lawmakers and their staffs in a tense meeting last January. It’s been described as a personal attack in the mini-war between Congress and the Department of Justice, which has been accused of either stonewalling or dragging their feet when it comes to document disclosures. The DOJ denied the account, saying Rosenstein was merely outlining his right to defend himself if Congress tried to hold him in contempt (via Fox News):

A 2nd source has now confirmed to me that, in a meeting on January 10, Deputy A-G Rosenstein used the power of his office to threaten to subpoena the calls & texts of the Intel Committee to get it to stop it’s investigation of DOJ and FBI. Likely an Abuse of Power & Obstruction.

Deputy Attorney General Rod Rosenstein threatened to “subpoena” emails, phone records and other documents from lawmakers and staff on a Republican-led House committee during a tense meeting earlier this year, according to emails reviewed by Fox News documenting the encounter and reflecting what aides described as a "personal attack."

The emails memorialized a January 2018 closed-door meeting involving senior FBI and Justice Department officials as well as members of the House Intelligence Committee. The account claimed Rosenstein threatened to turn the tables on the committee's inquiries regarding the Russia probe.

“The DAG [Deputy Attorney General Rosenstein] criticized the Committee for sending our requests in writing and was further critical of the Committee’s request to have DOJ/FBI do the same when responding,” the committee's then-senior counsel for counterterrorism Kash Patel wrote to the House Office of General Counsel. “Going so far as to say that if the Committee likes being litigators, then ‘we [DOJ] too [are] litigators, and we will subpoena your records and your emails,’ referring to HPSCI [House Permanent Select Committee on Intelligence] and Congress overall.”

A second House committee staffer at the meeting backed up Patel’s account, writing: “Let me just add that watching the Deputy Attorney General launch a sustained personal attack against a congressional staffer in retaliation for vigorous oversight was astonishing and disheartening. ... Also, having the nation’s #1 (for these matters) law enforcement officer threaten to 'subpoena your calls and emails' was downright chilling.”

The committee staffer noted that Rosenstein’s comment could be interpreted as meaning the department would “vigorously defend a contempt action" -- which might be expected. But the staffer continued, "I also read it as a not-so-veiled threat to unleash the full prosecutorial power of the state against us.”

A DOJ official told Fox News that Rosenstein “never threatened anyone in the room with a criminal investigation.” The official said the department and bureau officials in the room “are all quite clear that the characterization of events laid out here is false,” adding that Rosenstein was responding to a threat of contempt.

“The Deputy Attorney General was making the point—after being threatened with contempt — that as an American citizen charged with the offense of contempt of Congress, he would have the right to defend himself, including requesting production of relevant emails and text messages and calling them as witnesses to demonstrate that their allegations are false,” the official said. “That is why he put them on notice to retain relevant emails and text messages, and he hopes they did so. (We have no process to obtain such records without congressional approval.)”

Whatever the case it captures the tension between the DOJ and Congress. In April, DOJ finally turned over the two-page memothat supposedly formed the basis for the FBI’s counterintelligence probe into the Trump-Russia collusion allegations, but only after Congress threatened Rosenstein and FBI Director Chris Wray with impeachment. The conflict over the disclosure of documents relating to the Russia investigation is ongoing, however.

From colleague Catherine Herridge. GOP FL Rep Matt Gaetz says DoJ has tried to intimidate staff over attempted Hse oversight. Says "staff has literally been scared to the point of physically shaking in my Congressional office out of concern for their family."