NBC News: Deputy AG Rosenstein Is Ready To Be Fired 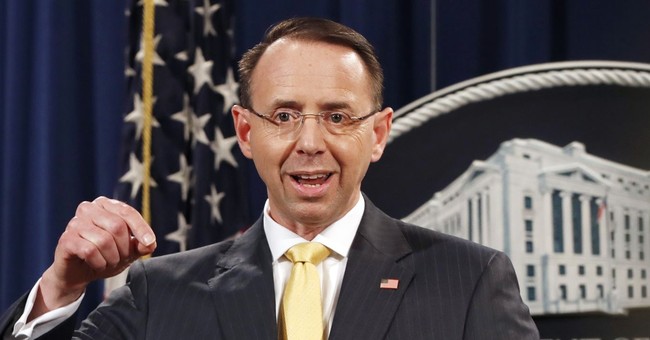 For Deputy Attorney General Rod Rosenstein, he’s ready to be fired by President Trump. NBC News reported that he’s told his closest aides that he prepared to get his pink slip. He’s reportedly at peace with his time at the Department of Justice (via NBC News):

Deputy Attorney General Rod Rosenstein has struck a stoic and righteous tone in private conversations he has had this week about the fate of his job as President Donald Trump has launched public criticism against him and considered firing him, according to three sources who have spoken to Rosenstein.

In those conversations, he has repeated the phrase, "Here I stand," a reference to Martin Luther's famous quote, "Here I stand, I can do no other." Coincidentally, former FBI Director James Comey, whom Rosenstein fired, repeated the same phrase to President George W. Bush in a conversation that has been widely reported and that Comey describes in his forthcoming book.

One source who spoke to Rosenstein said he seemed fully aware he may soon lose his job and was at peace with the possibility, confident he had done his job with integrity.

Those same sources spoke to Rosenstein multiple times over the course of his tenure as the No. 2 attorney at the Justice Department and say Rosenstein now seems less anxious than he has been at previous times when the president has criticized him.

Rosenstein has been at the center of the FBI scrutiny, specifically the alleged FISA abuses that have occurred at the FBI/DOJ. A FISA warrant was secured to spy on Carter Page, a former foreign policy adviser to Donald Trump. The evidence used to obtain the warrant was the Steele Dossier, a document compiled by a former British spy, Christopher Steele, who was contracted by a research firm, Fusion GPS, whose services were retained by the Clinton campaign. It was opposition research for the Clinton campaign. This is what was used to secure a spy warrant? The controversy and investigation is ongoing. Recently, Michael Cohen, the president’s personal attorney, has his office, residence, and hotel room raided by FBI agents who were searching for documents relating to the 2005 Access Hollywood tape and whether there were activities conducted to suppress that tape.

Rosenstein reportedly signed off on the raid after coming across information forwarded by Special Counsel Robert Mueller who is investigating allegations of collusion between the Trump campaign and the Russians. The information was outside his purview, but possibly felonious, hence why it was turned over to other federal authorities. Trump was reportedly furious over the raid, calling it a disgrace and a witch-hunt. Once again, there’s speculation into whether Trump would fire Mueller as well.