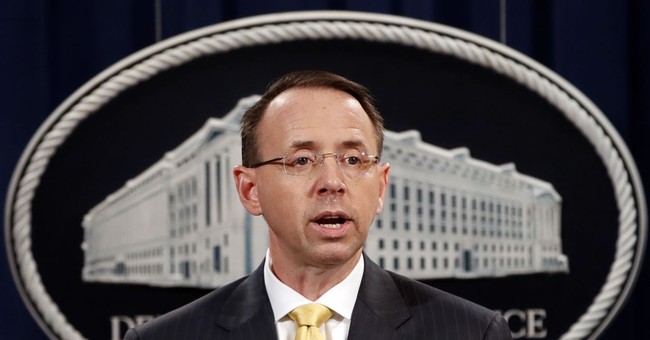 The Department of Justice has been dragging its feet on multiple document requests from Congress. From Hillary Clinton, alleged FISA abuses, and the firing of then-FBI Deputy Director Andrew McCabe, the DOJ owes Congress over a million pages in documents. Needless to say, the process in releasing these files has been very slow. Rep. Devin Nunes (R-CA) made similar threats in April, where he said Deputy Attorney General Rod Rosenstein and FBI Director Christopher Wray could face impeachment charges if they keep this up. He wanted to review the documents that set off the FBI’s counterintelligence investigation into possible collusion between the Kremlin and the Trump team in July of 2016. A two-page memo was said to be the foundation for the investigation that’s not being headed by Special Counsel Robert Mueller; the DOJ turned over the document a day after Nunes made the impeachment threat, on April 10.

Well, it looks like the House Freedom Caucus is following suit, drafting articles of impeachment against Rosenstein as a “last resort” (via WaPo):

The document, which was obtained by The Washington Post, underscores the growing chasm between congressional Republican leaders, who have maintained for months that special counsel Robert S. Mueller III should be allowed to proceed, and rank-and-file GOP lawmakers who have repeatedly battled the Justice Department during the past year.

The draft articles, which one of its authors called a “last resort,” would be unlikely to garner significant support in Congress. But the document could serve as a provocative political weapon for conservatives in their standoff with Mueller and the Justice Department.

Members of the conservative House Freedom Caucus — led by Rep. Mark Meadows (R-N.C.), a Trump confidant — finalized the draft in recent days. It came after weeks of disputes with Rosenstein over the Justice Department’s response to congressional requests for documents about the decisions and behavior of federal law enforcement officials working on the Russia investigation and other federal probes, including the investigation into 2016 Democratic presidential nominee Hillary Clinton’s email server.

Meadows acknowledged the draft in an interview Monday, calling the one-page document “a last resort option, if the Department of Justice fails to respond” to his requests for more information.

“My frustrations about their inability to respond to simple requests could warrant further action,” Meadows said, adding that many of his colleagues are nearing a breaking point with Rosenstein.

Rosenstein has been someone many have feared would be fired by President Trump. Rosenstein himself is said to be ready to be given his pink slip if the time came. The ire of the president surfaced again last month when FBI agents raided the office, residence, and hotel room of his personal lawyer, Michael Cohen. Mueller reportedly first obtained the information that led to the raids, but had no use for it regarding the Russia probe, so he passed it along to other federal authorities; Rosenstein was said to personally sign off on the raids. Cohen is now under the microscope for bank fraud and FEC violations. The alleged affair between porn star Stormy Daniels and Trump has been a media obsession for weeks and the basis for these raids, though it seems the agents were looking for information directly related to the 2005 Access Hollywood tape that was leaked in the tail end of the 2016 election. It’s the one where Trump discusses grabbing women in a certain area of their anatomy, which we won’t delve into at this moment. It caused outrage among the Left, but outside of the Democratic bubble, no one cared.

The threat of Rosenstein or Mueller being fired have gone down, even Trump said that the press keep writing that he’s going to axe them for months now—and yet the two men remain at their posts. He hoped for a quick end to the investigation during a shared press conference with Japanese Prime Minister Shinzo Abe last month. Rosenstein also told the president more or less that he’s got nothing to worry about concerning the Mueller investigation, or the investigation into his lawyer, Mr. Cohen.

At the same time, it seems Mr. Rosenstein, or someone at DOJ, needs to increase the rate of disclosure concerning these document requests. Congress isn’t a FOIA recipient. If they want something, they should get it. We’ll see what happens.