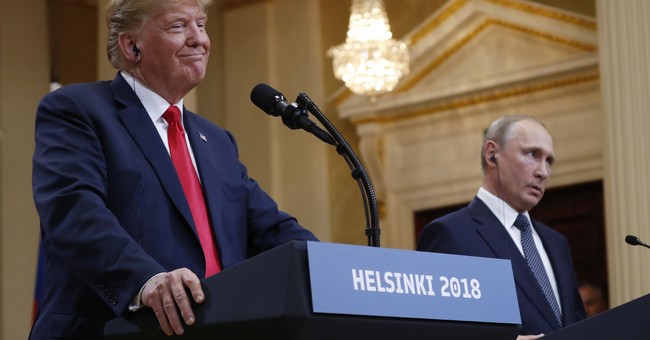 Apparently, we’re at war with Russia…in the minds of liberals. Just six years ago, Democrats mocked Mitt Romney and the GOP for suggesting that Russia is our biggest geopolitical foe. Now, because Hillary Clinton lost the 2016 election and the Left needs an emotional crutch, they’ve turned to being quasi-Russophobic. Russia cost Hillary Clinton the election, they say, among other actors, like James Comey, the FBI, the DNC, Barack Obama, Bernie Sanders, and Joe Biden—all have been cited by Mrs. Clinton as contributing factors to her defeat. We all know she lost because she was a weak candidate, with appalling character numbers (i.e. she’s not trustworthy), topped with no economic message and zero political charisma. She’s a two-time loser. Bill has political skills; Hillary was not blessed with that gift. The more she was in the spotlight, the more her approval numbers tanked.

Yet, the so-called Russia hacking, in which no vote tallies were altered, has been a major point for Democrat to harp on the airwaves. Specifically, the targeting of Clinton campaign chairman John Podesta’s emails, which wasn’t necessarily a hack. He was phished by a fake password reset email. This is hardly sophisticated. It’s a no-brainer: don’t respond or open the damn email. He didn’t. In fact, a typo in an emailfrom a tech aide led to 50,000 emails being made public on Wikileaks; the aide reportedly wanted to say it’s an illegitimate email, not legitimate.

Once again for the haters:

Podesta & DNC were not hacked

They didn't implement BASIC security measures that would have stopped infiltration.

Both gave away password to primitive spear phishing. No sophistication.

Somehow, this event was on par with Pearl Harbor and the 9/11 terror attacks. In February, Glenn Greenwald of The Intercept touched on this growing liberal hysteria over Russia, and yes—aptly noted that all of it occurred under Obama’s watch. This came after the Department of Justice indicted 12 Russian nationals for running a social media troll farm. The DOJ recently indicted 12 Russian intelligence officers as well, all of which will never see the inside of a courtroom to scrutinize and verify the charged lobbed against them mind you (via The Intercept):

Russia launched a war against the United States of America in 2016. And won.

In the wake of …[the] indictments alleging that 13 Russian nationals and entities created fake social media accounts and sponsored political events to sow political discord in the U.S., something of a consensus has arisen in the political and media class (with some notable exceptions) that these actions not only constitute an “act of war” against the U.S., but one so grave that it is tantamount to Pearl Harbor and 9/11. Indeed, that Russia’s alleged “meddling” is comparable to the two most devastating attacks in U.S. history has, overnight, become a virtual cliché.

Let’s leave aside what a stinging indictment this claim is of the Obama presidency. It not only means that Barack Obama allowed an attack of the magnitude of Pearl Harbor and 9/11 to happen on his watch, but worse, did very little — basically nothing — in response, allegedly due to fears that any retaliation would be criticized by Republicans as partisan. But for those who really believe this rhetoric, can fears of political attacks really justify inaction by the commander-in-chief — whose primary duty, we’re so often told, is to protect the nation — in the face of a Pearl Harbor or a 9/11? To posit this equivalence is to condemn Obama in the harshest possible terms, to accuse him of utter malfeasance in protecting the nation.

But the more important question is the one these chest-beating politicians and pundits notably refrain from addressing. If Russian election meddling is on par with the Pearl Harbor and 9/11 attacks, then should the U.S. response be on par with its response to those attacks?

Former Young Turks reporter Michael Tracey has been skeptical of this Trump-Russia collusion story for months, adding that he’s not convinced that reported fake password reset emails is akin to the sinking of the U.S.S. Arizona, nor does he really consider it a hack. Also, he said that what gets ignored about the Wikileak email saga is that it yielded a lot of good information for voters. It provided transparency. From his post on Medium from December of 2016, where Tracey assumes that Russia “hacked the election.”

9/11, Pearl Harbor, Democracy Under Attack, International Order Collapsing, We've Become Weimar Germany... at a certain point, you can't barrage people with never-ending, always-escalating hyperbole and expect them to do anything but ignore you https://t.co/j8NlY4VocV

The retrospective characterization of what happened focuses almost exclusively on how it was an Attack On America, while ignoring what that “attack” plainly yielded: information that exposed the corruption and deceit of some of the country’s most powerful political figures

This gets to why the hyperventilation about “Russian interference” has always irked: if the fruits of that “interference” was clearly revelatory & newsworthy information being provided to voters, it might have been the most benevolent instance of “foreign interference” in history

Indictments are allegations, not objective facts. Indictments frequently fall apart upon scrutiny. This would be understood as common sense in almost any other context https://t.co/opfEE9UEsR

Let’s assume, for the sake of argument, that it’s all true: the Russian government really did “hack the election,” which is to say they coordinated the “hack” of the Democratic National Committee email server, as well as John Podesta’s personal gmail account.

What were the fruits of the offending “hacking” op? Let’s review:

It revealed that Donna Brazile, a DNC vice chair, was feeding debate and forum questions to her favored campaign, thereby providing Hillary Clinton with an undue strategic advantage over Bernie Sanders. CNN colleagues such as Jake Tapper subsequently condemned Brazile, and she was forced out of her position as an on-air contributor.

It revealed that the DNC and the Hillary campaign had merged operations long before the conclusion of the primary campaign, which directly contradicted assurances from DNC officials that they were to remain completely neutral in the primary race. That was a lie; they devoted material resources to their preferred candidate while the race was underway.

It revealed that the DNC-Clinton campaign collusion began as early as April 2015, before Bernie Sanders even entered the race.

It allowed for the public to view speech transcripts that Hillary had concealed, despite declaring in February 2016 that she would “look into” releasing them. If not for the “hack,” voters would have never seen her closed-door remarks about crucial subjects such as the TPP, the proposed Syria “no-fly zone,” and Saudi Arabia, and in time for the election.

It revealed the true operations of the Clinton Foundation, which functioned as a political patronage machine for Bill and Hillary’s lackeys, and which was used as proxy to enrich the power couple

This is the terrible misfortune that the American people were subject to as a result of the supposed Russian “hack”?—?greater information about how powerful political officials operate in the dark.

And that’s the point. It’s sour grapes. Hillary Clinton lost—and the Democratic Party’s dirty laundry was aired for all to see. So, how to pivot? Scream, whine, and act like a crazy person about Russia hacking the election, or something.

It’s a textbook example of liberal media overreach. Everyone knows its crap. No one believes the media’s reports on its reported severity because there’s no there, there. Cyber operations are part of the geopolitical landscape. This is not some new era, and the media should stop treating it as such. China hacked the U.S., stealing 20 million records from the Office of Personnel Management in 2015. It caused the U.S. to pull their intelligence assets in China out of fear that they could be compromised. What did Obama do retaliatory wise on that attack? The selective outrage is also getting to be absurd, as if nothing bad happened during the Obama administration, which was one of the worst moments in American foreign policy history, a saga of inaction and dithering caused by paralysis by analysis.

Even when the Russian interference was occurring, the Obama White House more or less sat on their hands. Former intelligence community officials have criticized their response. Fellow Democrats have notedthat the Obama administration dropped the ball during this period. They fumbled the ball—badly.  Last Friday, CNN’s Jake Tapper noted that the Obama team was a little asleep at the switch. Yet, that’s not taken into account. I thought I would never agree with The Nation’s Katrina Vanden Huevel on anything, but she noted that there’s a neo-McCarthyite vibe to it.

To conclude, no vote tallies were altered. No spikesin suspicious cyber activity occurred on Election Night. Former Attorney General Loretta Lynch said no technical interferencefrom Russia occurred. Should we guard against future attempts at interference? Yes, but this is being blown way out of proportion—always has been and always will be because the media hates Trump. This is a tantrum. And this will never be 9/11 or Pearl Harbor. The more the media scream, the fewer people will listen because all the points made to back up this kooky narrative are so off base, you don’t even need to read into it; a phishing email is like the bomb that sunk a battleship or a plane that flew into the towers. C’mon, guys.