Attorney General Lynch: No ‘Technical Interference’ From Russia During The Election 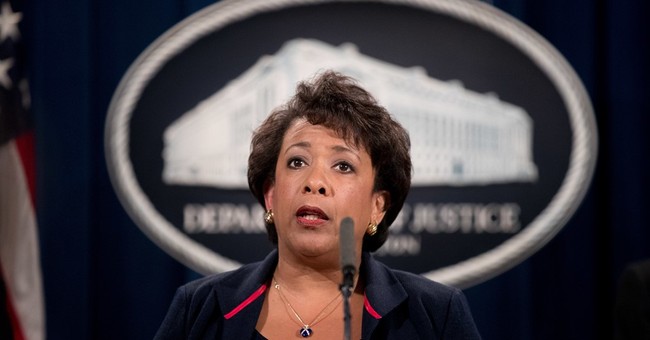 Well, here’s another “people have said” update regarding Russia’s allegedly hacking our election to help Trump. There’s still a lot of rumor, speculation, and unsubstantiated reports about Russia’s role in the 2016 election because no one has gone on the record. A lot of anonymous sources are being taken as fact, even when the FBI and the Department of Justice are still not convinced about the nature of the Russian hacks. The CIA is saying Russia interfered to help Trump; the FBI is still skeptical. James Clapper, the outgoing Director of National Intelligence, also said that he isn’t willing to comment on whether Moscow intended to help Trump. Again, this was from an anonymous source that is close to the ODNI. These folks obviously work both ways. The thing here is to allow both agencies, despite their apparent feuding, to do their jobs. Let’s see what comes of this because right now, there’s a lot of rumor mixed in with partisanship that’s tainting the credibility of the results.

I think Congress should look into these claims, though I think it’s safe to say that in the modern geopolitical era, hacking is not an unusual event. Still, it deals with national security and the Senate Intelligence Committee should take a peek.

There’s no harm since no one who is serious on either side is saying that Trump’s win is illegitimate (with the exception of Paul Krugman) and he should step down. He won. Period. And the only person Hillary Clinton has to blame for losing this election is herself, not fake news, misogyny, racism, sexism, or any other progressive drivel that seeks to avoid holding her accountable: she was an awful candidate and she deserved to lose.

That being said, Attorney General Loretta Lynch weighed in on the hacking allegations with Politico and found that there was no “technical interference” during the election, with Real Clear Politics noting that the integrity of our election system was not in danger [emphasis mine]:

This was a grave concern to us, so we began in the summer to look at what we could say publicly about this issue, and that is why you saw the intelligence community release its report in October, before the election. Letting the American people know that the intelligence community had determined that Russia was behind the hacks [of the DNC] itself. The investigation is ongoing, certainly the review is continuing. We rarely do that kind of public attribution, but it was important in that instance because the election effects everyone.

It is not a matter of the results, it is peoples' faith in the integrity of the system. At the same time, the Department of Homeland Security was involved in reaching out to every state to make sure that they had access to every resource they needed to protect the state electoral system as well.

Fortunately we didn’t see the sort of technical interference that I know people had concerns about, also, in terms of voting machines and the like. But a lot of education and training went on about that, and a significant number of states did reach out to DHS and talk to them about these issues.

Regarding the general consensus over Russia’s hacking that allegedly was done to help Trump, 59 percent of voters felt it didn’t make a difference. Moreover, we have another angle from the mysterious anonymous source pit, which is that disgruntled Democrats fed Wikileaks the dirty laundry about Clinton and her party, not the Russians (via Washington Examiner):

A man who calls himself a WikiLeaks operative is claiming "inside leaks," not Russian hackers, are responsible for the release of emails that embarrassed Hillary Clinton's campaign and the Democratic National Committee during the presidential race.

Craig Murray, a former British ambassador to Uzbekistan who was fired amid misconduct allegations, said he was involved in the email leaking operation. Murray claimed he personally received some of the emails from "disgusted" Democratic whistleblowers during a secret hand-off in Washington.

Thousands of emails from the Democratic National Committee and John Podesta, the chairman of Clinton's presidential campaign, were released during the campaign.

Then again, there’s this angle from The New York Times about Russian-backed hackers targeting the DNC through email phishing scams—and where the levees might not have been so easily broken regarding John Podesta’s emails if a Clinton aide didn’t have a typo in an email about a suspicious email (via NYT):

A second team of Russian-affiliated hackers began to target the D.N.C. and other players in the political world, particularly Democrats. Billy Rinehart, a former D.N.C. regional field director who was then working for Mrs. Clinton’s campaign, got an odd email warning from Google.

Mr. Rinehart was in Hawaii at the time. He remembers checking his email at 4 a.m. for messages from East Coast associates. Without thinking much about the notification, he clicked on the “change password” button and half asleep, as best he can remember, he typed in a new password.

What he did not know until months later is that he had just given the Russian hackers access to his email account.

Hundreds of similar phishing emails were being sent to American political targets, including an identical email sent on March 19 to Mr. Podesta, chairman of the Clinton campaign. Given how many emails Mr. Podesta received through this personal email account, several aides also had access to it, and one of them noticed the warning email, sending it to a computer technician to make sure it was legitimate before anyone clicked on the “change password” button.

“This is a legitimate email,” Charles Delavan, a Clinton campaign aide, replied to another of Mr. Podesta’s aides, who had noticed the alert. “John needs to change his password immediately.”

With another click, a decade of emails that Mr. Podesta maintained in his Gmail account — a total of about 60,000 — were unlocked for the Russian hackers. Mr. Delavan, in an interview, said that his bad advice was a result of a typo: He knew this was a phishing attack, as the campaign was getting dozens of them. He said he had meant to type that it was an “illegitimate” email, an error that he said has plagued him ever since.

Whatever may come of this, yes, Russians are hacking the U.S., but are they doing it to help Trump? That’s the question. The French, Israelis, and the Chinese are probably doing it as well. Should we have prolonged discussion about how to beef up cyber security? Of course, in fact, cyber warfare is one area where the Chinese are way ahead of us. We’re these cyber hacks directed by the Kremlin? Were they done to help Trump? Those are the questions that appear to be unanswered by anyone willing to go on the record. There are a lot of unnamed sources—and The Times sure knows about the dangers of using anonymous sources too much. It’s a wait-and-see game. Let the principle actors investigate these claims, but that’s going to be problematic since Sen. Harry Reid (D-NV) and the rest of the shell shocked Left can’t keep a lid on peddling unsubstantiated rumors about Moscow personally directing hacks to help the president-elect. Right now, the Left is only concerned about the hacks because it made Clinton look bad and might have cost her the election.

UPDATE: As we speak, The Hill is reporting that Wikileaks' Julian Assange said that some of the material leaked might have been Russian, but that his source is not. The hacker Guccifer 2.0 is another story.

The Hill and other outlets received documents from a hacker or hackers calling itself “Guccifer 2.0.” Guccifer 2.0 also posted separate documents on its own site. Assange denied knowing Guccifer 2.0 on Hannity's show Thursday.

“Our source is not the Russian government,” said Assange, later claiming WikiLeaks did not receive its material from any state actor, Russia or otherwise.

Assange has been adamant that Russia did not send the files to his site. In fact, his confirmation that a state actor did not send the hacked emails violates a longstanding WikiLeaks policy of not making any comment about sources.

He did leave the possibility open that Guccifer 2.0’s leaks to the media were a Russian plot.