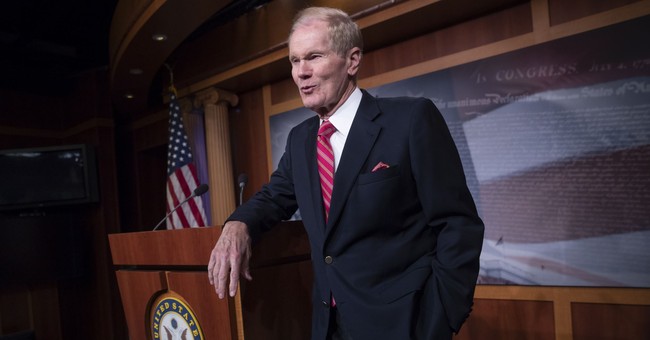 Florida is where the Republicans can pick up a Senate seat. Incumbent Democrat Bill Nelson, who’s been elected three times, is facing something he’s never experienced in his past elections: a solid candidate. Republican Gov. Rick Scott, who is term-limited, has jumped into the ring. He has the money. He has the political acumen. He’s outworking Nelson—and it’s showing. Scott now leads Nelson by five points (via Tampa Bay Times):

A new CBS News poll of Florida's Senate race shows Gov. Rick Scott with a 5-point advantage over Sen. Bill Nelson, 46-41 percent, in a survey with a margin of error of 3.5 percent — another sign of a close contest.

Nearly five months before the election, the survey shows only 6 percent of voters are not sure of their preference in a battle in which both candidates and like-minded groups will spend tens of millions of dollars on TV ads to sway relatively few voters' minds.

The poll shows 62 percent of voters approve of Scott's handling of his job and 54 percent approve of Nelson's.

The poll suggests the two candidates are running dead even with Hispanic voters (Nelson 37 percent, Scott 36 percent, 22 percent not sure).

Nelson knew in 2017 this was going to be a fight, meeting with Senate Minority Leader Chuck Schumer (D-NY) last fall and saying not so subtly that he was going to need a lot of money. Scott is independently wealthy and could finance a run with his own money. He had already has given substantial sums to his gubernatorial efforts. Yet, while Hispanic support is a dead heat, it could change since Scott is running ads in Spanish, along with mopping the floor with Nelsonconcerning outreach efforts. Nelson’s inability to lack of effort in matching Scott’s activities is making some Democrats nervous in the state. Despite support for gun control in the state, it has not helped Nelson. Scott is also wining older white voters, who are the most likely to turn out this November. Yes, he’s in big, big trouble.

To make things more awkward for Nelson, he recently ventured into Pasco County, along the I-4 corridor, the deciding area in statewide elections for the Sunshine State, and said this was the place where his re-election bid will be determined. Bad timing; the area has become Trump country.

Now, it’s quite possible that the race could be tied, but if Nelson remains in the neutral position, I’ll bet that the GOP can clinch a win here. At the same time, it’s very possible the overall GOP majority won’t increase, even decrease to a 50-50 split. Claire McCaskill might get booted, but I would not be shocked if Heitkamp, Tester, and Donnelly hold on in North Dakota, Montana, and Indiana respectively. I say that for now. Of course, I want all of these folks to lose. Joe Manchin in West Virginia is probably going to hang on as well. If Republican Dean Heller falls in Nevada, which is very much within the realm of possibility, then we’re stuck at a 50-50 split. Vice President Pence better roll in a cot into the Capitol building, but before that—we need to get Anthony Kennedy’s vacancy filled.