They Got Him: Waffle House Shooter Arrested 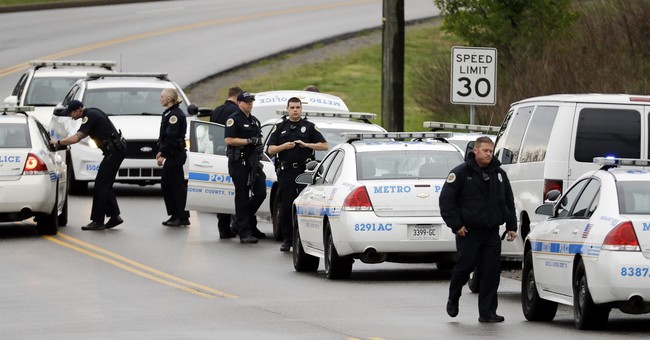 On early Sunday morning, four peoplewere shot and killed in Antioch, Tennessee. Twenty-nine year old Travis Reinking is the suspect. He reportedly entered the establishment naked and opened fire. The shooting occurred around 3:30 A.M. Customer James Shaw, Jr. is being hailed as a herofor charging Reinking, disarming him, and throwing his AR-15 rifle over the counter. Reinking fled and was up until recently still at large by police. Reinking had reported said that Taylor Swift was stalking him, and that (via WaPo):

Police in Nashville said Monday that there had been “no confirmed sightings” of Travis Reinking, the 29-year-old accused of opening fire in a Waffle House and killing four people before effectively vanishing, prompting a sprawling manhunt across the Tennessee capital.

“We don’t know where he is,” Don Aaron, a spokesman for the Metropolitan Nashville Police Department, said at a news briefing more than a day after the shooting. “It is possible he has left the area, but we don’t know.”

Most recently, Aaron said, Reinking stole a BMW from a dealership in suburban Nashville just four days before the Waffle House shooting, eluding police officers who later recovered the vehicle at his apartment complex.

Reinking was captured around 1 P.M. near his apartment complex based on a tip from police. He had a handgun on him when police arrested him. Around 160 law enforcement officials were involved in the search to find him (via NYT):

The authorities announced the arrest of the suspect, Travis Reinking, just after 1 p.m. time., in a wooded area that was within sight of the apartment complex where he lived.

After receiving a tip of a man matching Mr. Reinking’s description in that area, several detectives entered the woods, and when one recognized the suspect, he drew his gun and ordered him to the ground.

In the minutes following Mr. Reinking’s arrest, police cars, their blue lights flashing, lined the road running parallel to the tree line. Officers stood at ease beneath an overcast sky, with the capture of the suspect having eased the worries coursing through the heart of a metropolitan area of more than 1.8 million people.

The authorities had cautioned that Mr. Reinking, who was accused of using an AR-15 in the assault early Sunday, should be considered “armed and dangerous.” On Monday morning the police said there were 160 law enforcement officers searching for Mr. Reinking, but there had been “no credible sightings” of him at that time.