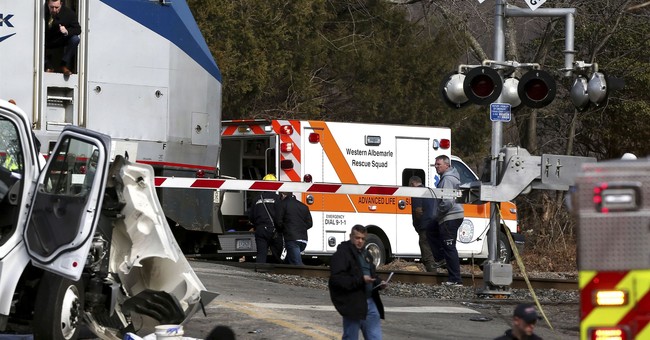 Katie wrote about Bernie Sanders supporter Jonathan Tasini tweeting horrible remarks about the recent Amtrak train crash that was carrying members of the Republican Party. They were on their way to the annual party retreat, which is being held this year in West Virginia. In a now-deleted tweet, he said, “Wow between train full of goopers [sic] hiting truck and this, God is working hard today to clean up the stink. Thank her.” The other thing was the announcement that Rep. Trey Gowdy (R-SC) was retiring. First, God is not human, though liberals in their insufferable stupidity try to push a feminist narrative with this higher being. Second, who in their right mind tweets this? The train collided with a garbage truck and one of the passengers in the vehicle died.

He later said prior to deleting his tweet, “Apologies people. It was poked out in midst of convo w 2 colleagues on the deep racism/hypocrisy/criminality promoted by GOP or as GOPer Amanda Carpenter says, gaslighting of America . Deleting.” He has since protected his tweets.

"sorry I made a joke about a train crash. i was distracted by how racist everyone involved is" https://t.co/96oD9FwqDN

Yet, it wasn’t just die-hard progressives tweeting inappropriate things, The Weekly Standard’s Bill Kristol stepped in it as well.

“Once we’re sure everyone involved is ok, assuming there are, I hereby give permission to Twitter to indulge in all manner of GOP train wreck jokes. I do think that by having a train hit…yes, a garbage truck…the scriptwriters of “2018” jumped the shark.”

We've officially not only lost our minds but anything remotely resembling a moral compass. @BillKristol - take a bow. pic.twitter.com/e4OFsmCPYi

Yes, he also deleted it, but The Hill’s Joe Concha grabbed a screenshot. Again, a person died, folks. But let’s just indulge this nonsense for a second, just one second. Given how the GOP tax bill is doing better in the polls, the record-breaking stock market closings, millions of workers getting bonuses, companies re-investing in America, the solid year in job creation, and the erosion of the Democratic advantage in the generic 2018 ballot, it’s way too soon to say anything has jumped the shark. This is like predicting who’s going to win the Super Bowl solely by looking at the preseason. Enough. Just stop. Stop with the awful remarks about train crashes, natural disasters, or any situation in which human lives are put at risk.

Also, I don’t get how anyone still thinks if they delete a tweet, it’s gone forever. That’s not how this works. Someone will always screenshot insanity and its shelf life is infinite.