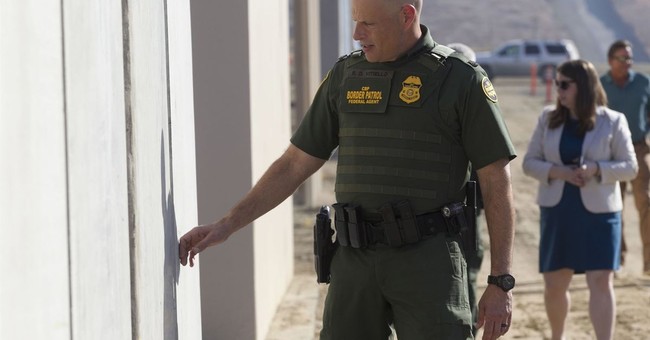 For those who mock the border wall and think it’s a waste of money, it stopped U.S. Special Forces teams that were testing the prototypes. The towering height made it almost impossible for assault teams to scale the fortification that President Trump wants along our southern border with Mexico. It’s projected to cost $18 billion over the next decade; one prototype for the wall is a staggering 30 feet tall. The minimum height that Customs and Border Protection want for the wall is 18 feet, though up to 30 is not off limits. It also has to be six feet deep. The testing concerning scaling was a three-week endeavor (via CBS Local DFW) [emphasis mine]:

A Customs and Border Protection report on the tests identifies strengths and flaws of each design but does not pick an overall winner or rank them, though it does point to see-through steel barriers topped by concrete as the best overall design, the official said.

The report recommends combining elements of each, depending on the terrain. The official likened it to a Lego design, pulling pieces from different prototypes.

Carlos Diaz, a spokesman for Customs and Border Protection, said the agency is still in “the testing phase” and that results are being evaluated.

A proposal by Customs and Border Protection calls for spending $18 billion over 10 years to extend barriers to cover nearly half the border, though it is unclear if Trump supports that plan. The agency proposes 316 miles (505 kilometers) of additional barrier by September 2027, bringing total coverage to 970 miles (1,552 kilometers). It also seeks 407 miles (651 kilometers) of replacement or secondary fencing.

Funding for a border wall is a key detail that President Trump is looking for in an immigration deal with Congress. The Washington Post editorial board agreed that funding for a border wall in exchange for protections for DACA recipients is not a bad trade-off. And now we know that tests to scale the fortifications by our special forces could not be done.  It’s time to enforce our immigration laws. It’s time to acknowledge that we’re a country that has laws and borders.