Uranium One: AG Sessions Orders DOJ To Put FBI’s Evidence Under The Microscope 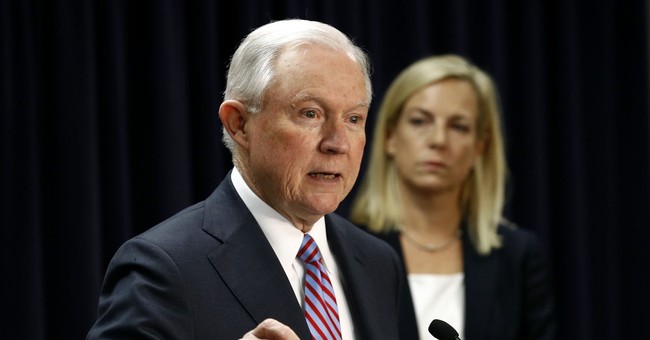 So, last month, there were rumors that Attorney General Jeff Sessions was looking into whether a special counsel would be necessary to look into Clinton-Uranium One transaction. In his testimony to Congress in November, he threw cold water on it, saying there wasn’t enough evidence to appoint one. Now, NBC News is reporting that Sessions has instructed prosecutors at the Justice Department to interview the FBI agents who were involved in the Uranium One probe and explain the evidence they obtained [emphasis mine]:

On the orders of Attorney General Jeff Sessions, Justice Department prosecutors have begun asking FBI agents to explain the evidence they found in a now dormant criminal investigation into a controversial uranium deal that critics have linked to Bill and Hillary Clinton, multiple law enforcement officials told NBC News.

The interviews with FBI agents are part of the Justice Department's effort to fulfill a promise an assistant attorney general made to Congress last month to examine whether a special counsel was warranted to look into what has become known as the Uranium One deal, a senior Justice Department official said.

A senior law enforcement official who was briefed on the initial FBI investigation told NBC News there were allegations of corruption surrounding the process under which the U.S. government approved the sale. But no charges were filed

In recent weeks, FBI agents who investigated the case have been asked by Justice Department prosecutors to describe the results of their probe. The agents also have been asked if there was any improper effort to squash a prosecution, the law enforcement sources say.

The senior Justice Department official said the questions were part of an effort by the Sessions team to get up to speed on the controversial case, in the face of allegations from Congressional Republicans that it was mishandled.

The Uranium One case has been at least reported extensively by the media. It involves the Clintons, Russia, uranium, and a former Canadian-owned mining company called Uranium One. The Russian state-owned energy corporation Rosatom wanted a majority stake in the company, which was announced in 2010. Between 2009-2013, Rosatom gradually gained more control of Uranium One, while its then-chairman, Ian Telfer, gave over $2 million from his charitable foundation to the Clinton Foundation. Eventually, since uranium is a national security priority, the Council on Foreign Investment had to approve the sale; the secretary of state is on the nine-member panel. During this time, that was Hillary Rodham Clinton. In addition, Bill Clinton received a $500,000 check from a Russian bank involved in the Uranium One transaction; the former president was asked to deliver a speech. Previous reports had Uranium One’s mining stakes in the U.S. at 20 percent, meaning that the Russians would absorb those interests. That figure has been revised down to 11 percent. Hillary Clinton never disclosed these donations and it fed into the narrative that if you give money to the power couple, especially via their foundation—somewhere on the timeline a socioeconomic dividend would be delivered to the donor.

It was recently discovered that the Obama White House knew the Russians were also bribing their way through the deal, had their payment schedule, but did nothing in the hopes of resetting relations with Moscow. So, why are we revisiting this again? Ed Morrissey at Hot Air had a few reasons—all of them fraught with politics, though some aspects worthy of congressional oversight and an inspector general inquiry:

For one thing, Donald Trump has put a lot of pressure on Sessions to investigate Hillary Clinton, mainly to force the media to acknowledge that the Clintons had more commercial and political ties to the Russians than Trump ever did. He wanted a “sauce for the goose” probe to balance out what Trump considers a “witch hunt” investigation on Russia-collusion speculation. When the latter was still in-house at the DoJ, Trump wanted an FBI investigation for the former; now that the collusion probe has a special counsel, Trump wants the same thing for Uranium One.

That pressure increased two months ago after The Hill’s John Solomon uncovered an FBI informant who claimed that the DoJ had prevented him from blowing the whistle on Russian extortion and influence operations going back to 2009. That involved the Uranium One deal, among others, and specifically targeted Hillary Clinton. In response, Congress demanded that the DoJ lift the whistleblower’s non-disclosure agreement. A month later, Sessions told Congress that he was considering the necessity of appointing a special counsel to review the actions of the Obama-era DoJ in regard to Uranium One and the potential for a criminal investigation.

No matter what Sessions decides, he’ll run the risk of large-scale political blowback. If he chooses to shut it down without a special counsel, he’ll be torn to shreds by Trump and his supporters; if he appoints a special counsel, Democrats will accuse him of touching off a constitutional crisis (it won’t be, but that’s been their slogan all year). That’s why it will either be a special counsel or nothing at all, too. Even though there’s no reason at all to go outside the DoJ for such an investigation, Sessions won’t want his fingerprints on it.

In the meantime, Trump will have what he wants — a potential bookend to the “collusion” nothingburger that may force the news media to report on the Clintons and all their slimy dealings in conjunction with the Clinton Foundation. How long Sessions will string that out is anyone’s guess, but in the end it’s not just the Clintons whose reputations will be on the line. It involves the Obama administration too, whose DoJ silenced the FBI informant for some reason. That alone is worth an Inspector General review and Congressional oversight.