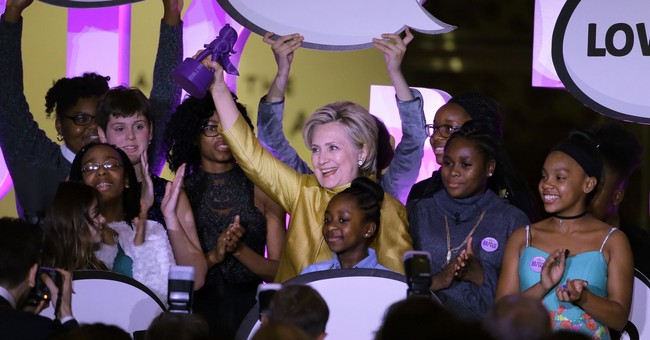 As we wrote yesterday, Hillary Clinton is still immensely unpopular. In fact, she’s hit her lowest mark ever in Gallup’s survey. Her favorable rating is at a dismal 36 percent. So, why is Hillary still sucking with voters, or at least voters who aren’t Democratic? Granted, she was never really that popular on the campaign trail. The more she was in the spotlight, the more unpopular she became. CNN’s Chris Cillizza had four reasons:

On Monday, President Trump saw fit to mention his 2016 victory while laying out his national security strategy for the country. Trump talks about his "electoral landslide" on an, at least, weekly basis -- ensuring that people never forget about what all sides agree was an incredibly nasty campaign.

The publicity tour around Clinton's memoir of the campaign -- "What Happened?" -- had a very clear message from Clinton: Yes, I lost. But, it's wasn't entirely (or even close to entirely) my fault.

3. She is the last Republican boogeyman

For years and years -- long before Clinton ran for president in 2008 and 2016 -- she was one of a handful of Democrats that all Republicans a) knew and b) hated.

4. We're still too close to it all

It's been a year and a few days since Clinton lost one of the most knockdown, drag-out presidential races ever.

These are good points; especially the unapologetic attitude the former first lady has taken on the book tour, where she has blamed James Comey, the FBI, the media, sexism, Russia, and the Democratic National Committee for her defeat, but she accepts responsibility, or something. It’s really a grudging apology—if you can call it that. Yes, the GOP does not like her, but it spills into Independent territory as well. In that Gallup survey, only 27 percent of Independents view Hillary favorably. It could be that she’s just unlikable. Both she and Bill are politics all the time, they’re secretive, and they think they play by a separate set of rules. The email server fiasco, in which we discovered that Hillary used an unsecure and unauthorized server from which she conducted all official business, can explain the former first lady’s flippant reaction to the whole story. It was compounded by her campaign’s inability to get ahead of it and offer explanations for the server, all of which were either undercut or debunked as the inquiry into this setup while she was secretary of state continued by the media and others.

Whatever the reason for disliking Hillary, and there are a lot of them, her supporters weren’t happy that Cillizza wrote about this survey. Thanks to our friends at Twitchy, they captured some grade-A entertainment, though some of the language is a bit salty:

Well, when you thought for months that the election was a lock for Hillary and then the Trump campaign delivered a swift punch to the mouth to those plans—I would still feel irritated too.