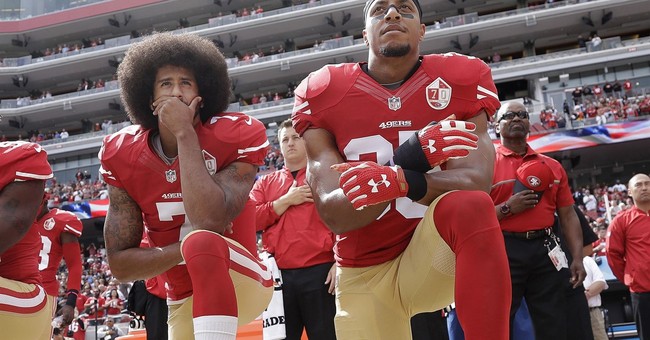 The National Football League has been a public relations nightmare this season. The national anthem protests have turned off fans and the league’s management has twisted itself into pretzels trying to toe a middle line. It’s only made them look worse. It all began when former San Francisco 49ers quarterback Colin Kaepernick decided to stand and then kneel during the Star-Spangled Banner last year. This year, more players have taken a knee after President Trump slammed the NFL at a political rally in September; the president views this as disrespectful. He’s not alone. The vast majority of Americans viewed Kaepernick antics as unpatriotic. The ratings are down for the league. Third week sales plummeted almost 20 percent this season. CNN even reported that NFL owners have data that shows the anthem protests are partially to blame for the decline in ratings.

Now, a new Harris poll shows that 60 percent of voters do not approve of how NFL Commissioner Roger Goodell has handled the matter, with another 77 percent saying that players should stand for the anthem; 59 percent felt that standing for the anthem should be compulsory (via The Hill):

According to data from The Harris Poll, 60 percent said they disapprove of Goodell’s handling of the matter. Fifty-five percent said Goodell has handled the issue in a way that has made both sides unhappy.

A strong majority, 77 percent, said the players should stand for the anthem. Fifty-nine percent said there should be a rule requiring the players to do so.

Goodell has a 50 percent approval rating, the poll found, although 56 percent of self-described hardcore fans say they disapprove of the job Goodell is doing.

The survey comes at a sensitive time for Goodell, who is in the process of renegotiating a new contract. That process has become complicated by reports that Goodell is seeking $50 million a year and lifetime use of a private jet, although the NFL has disputed those reports. Goodell makes about $30 million a year presently.

On Veteran’s Day weekend, the slate of games had NFL members wearing camouflaged gear to honor out troops, though they have spat in their faces, or at least that’s what everyone else sees, all season. The Left thought that Trump had picked a culture battle he couldn’t win. It turns out that Trump won before even a shot was fired.