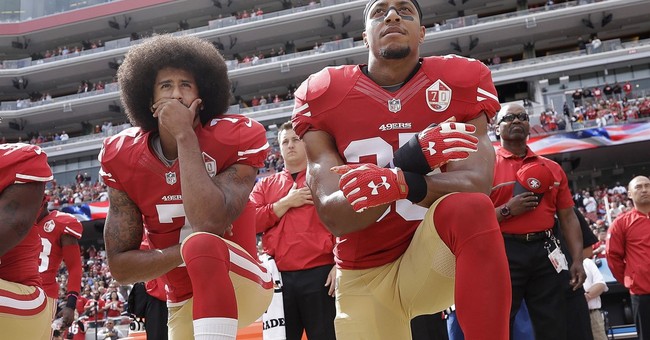 Well, the ratings are in for the National Football League and I bet you can already guess what the verdict was after this national anthem nonsense. Yep—that’s right. After a six-week period, ratings are down almost 10 percent. It seems ‘take a knee’ syndrome that hits some players when the Star-Spangled Banner is played has driven fans away.

As you already know, players are doing this to bring attention to police brutality and race issues facing America. So, they decided to engage in antics that are seen as disrespecting the flag, our troops, and our veterans. It’s been a public relations disaster, with approval for the league dropping 13 points, 34 percent of Americans saying they’re less likely to watch the NFL because of the protests, and third week ticket sales saw a near 20 percent dip. It all started when former quarterback for the San Francisco 49ers Colin Kaepernick decided to protest the anthem last year. President Trump went after the league for these antics last month. The league responded—and they’ve been getting kicked in the teeth ever since.

Via ESPN (yeah, they also have issues):

An average of 15 million people watched games for the first six weeks this year, compared with 16.2 million people through Week 6 last season, according to metrics from Nielsen.

In the past week, Credit Suisse lowered its price targets on both Fox and CBS stock, citing NFL ratings declines.

Compared with the first six weeks of the 2015 season, NFL ratings are off 18.7 percent -- a sharp drop, but a smaller decline when considering the general overall fall in television viewership due to people dropping their cable packages.

The owners know what’s going on here. They have data that the anthem protests are part of what’s impacting their bottom lines. On October 2, The Wall Street Journal reported some owners has reservations about taking on the president on this issue, warning it could be bad for business. Well, that was the right instinct (via WSJ):

The National Football League’s more muted approach in recent days to responding to attacks from President Donald Trump followed a tense meeting last week in which several owners argued the league’s combative stance was unproductive, according to three people familiar with the meeting.

Those owners argued that taking on a sitting president over whether players should be required to stand for the national anthem was bad for business, while others thought the league should continue to stand up to the criticism, these people said.

The disagreement is a contrast to the message of unity that NFL owners and players have tried to project over the previous eight days, as Trump took on the league over the protests and repeatedly disparaged the state of the game.