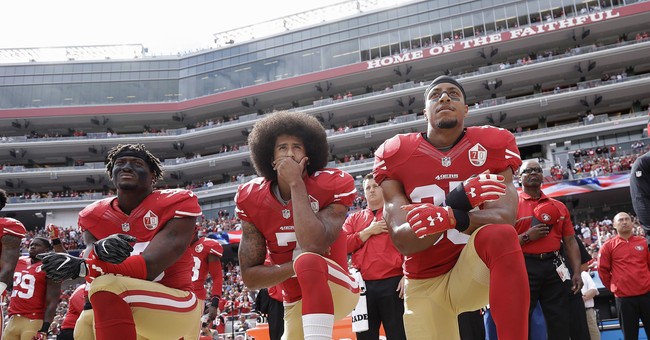 President Donald Trump went after the National Football League players who take a knee during the national anthem this week. The controversy began last year when former San Francisco 49ers quarterback Colin Kaepernick took a knee during the Star-Spangled Banner, which has caught on with other players in the league. On Friday, Trump called these people sons of bitches (via the Guardian):

Wouldn’t you love to see one of these NFL owners, when somebody disrespects our flag, to say, ‘Get that son of a bitch off the field right now. Out! He’s fired. He’s fired!’” the president said at a rally for Republican senator Luther Strange, who is running in a special election next week to remain in the seat vacated by attorney general Jeff Sessions.

“You know, some owner is going to do that. He’s going to say, ‘That guy that disrespects our flag, he’s fired.’ And that owner, they don’t know it [but] they’ll be the most popular person in this country.”

Players have forgotten that fans pay their salaries. Alienating half of your customers, regardless of politics, is just bad business.

Needless to say, this whole blowup is exactly what Trump wanted. The media is in meltdown mode. The NFL is going apoplectic. And some on the Left are saying that Trump has engaged in a culture war that he can’t win. I’m not so sure about that. In fact, they could be dead wrong (again). CBS Sports reported on a poll, where 72 percent found Kaepernick’s antics to be unpatriotic (via CBS Sports)

In two recent polls that were both conducted within the past week, a majority of respondents said that they disagree with Kaepernick's decision to protest racial inequality and police brutality by not standing for the national anthem.

In one poll, which was conducted by Reuters, 72 percent of Americans said that they thought Kaepernick's behavior was unpatriotic. Another 61 percent said that they do not "support the stance Colin Kaepernick is taking and his decision not to stand during the national anthem."

The Reuters poll of 2,903 adults was conducted between Sept. 6-12. Kaepernick's protest went public on Aug. 26.

Sounds like Trump gets more than supermajority support on this one, which brings us to words of wisdom from Mr. Larry O’Connor:

The @NFL should be less concerned with @realDonaldTrump and more concerned by how many millions of Americans (NFL fans) agree with him.