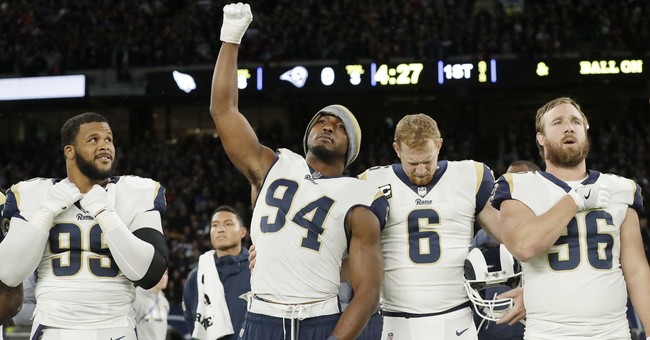 Former San Francisco 49ers quarterback Colin Kaepernick took a seat and then a knee during the national anthem last year. He set off the first salvo. Then, President Trump gave his thoughts about the Star-Spangled Banner protests in September, saying players who engage in such antics should be fired, suspended, or fined. The National Football League was about to head into war with Trump.

Since the spat, approval for the league is down, ticket sales are down, and almost 40 percent of Americans said they were less likely to watch football because of the protests. Seventy-two percent of Americans felt Kaepernick’s actions were unpatriotic. That was the ballgame. That was the end of this battle in the culture war. Trump won. It could have been for the most popular cause supported by the most respected organization, it still wouldn’t have saved the NFL from this horrendous PR nightmare. When people see you spitting on the flag, our veterans, and those still in uniform—you’ve lost. Even if that wasn’t the intention, the optics still kills it for you. Now, we have this new poll that shows approval for the NFL has dropped almost 20 percent since 2013 (via Fox News):

The National Football League is taking some hits these days.  A new Fox News Poll finds that since 2013, the league’s favorable rating has dropped 18 points.

“If the NFL were a political candidate, alarm bells would be going off in campaign headquarters,” says Democratic Pollster Chris Anderson who conducts the Fox News Poll with Republican Pollster Daron Shaw.

Taking on Trump isn’t always the best decision. While NFL fan decline has been occurring for some time, trying to take on Trump over showing respect for the national anthem surely accelerated fan discontent.