Remember, They’re Wrong About Everything, Especially On Firearms 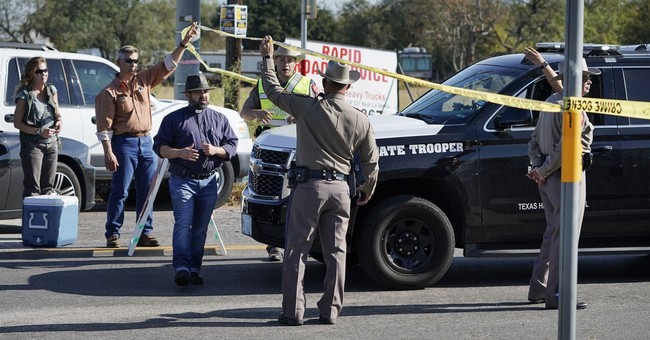 In June, the Washington Free Beacon’s Editor-in-Chief, Matthew Continetti had a good column about how the elite media doesn’t know what it’s talking about in the Trump era.

“They’re wrong about everything,” read the headline—and that is entirely applicable when it comes to news reports about guns and gun laws. It’s bad. We have media personalities not knowing the difference between semiautomatic and automatic—and not knowing that there have been laws regulating the latter since the 1930s. Again, liberal media folks, a semiautomatic system is one that discharges one round per trigger pull from a self-reloading system (aka virtually every firearm that’s sold on the market that isn’t a revolver or a bolt-action rifle). Second, every gun dealer with a federal firearms license has to perform background checks on all purchases. Third, and this relates to the Texas shooter, being convicted of domestic abuse prohibits you from owning guns. No debate here. If you’re found guilty of this offense, you should have your gun rights stripped.

On Sunday, Devin Patrick Kelley, 26, opened fire at a Baptist church, killing 26 people and wounding an additional 20 with a rifle. He was given a bad-conduct discharge in 2014 from the U.S. Air Force. Prior to that, however, he was convicted of domestic abuse against his wife and child in 2012, and given a yearlong jail sentence. That conviction should have barred him from owning guns, but he purchased a rifle in April of 2016 from Academy Sports & Outdoors. That’s the real question here. Instead, we have liberal mocking people for offering thoughts and prayers, even though they defended “Allahu Akbar” days before, and spouting off crap that is just untrue about firearms.

It was a white man who slaughtered half of the church in Texas.

That means everything is just fine.

Take guns away from men who abuse women and children. That should be the baseline for a civil society. Alas. https://t.co/3eQyz36Pij

The @NRA is soaked and bathed in blood. How do its adherents sleep at night?

Probably because none of their members commit these crimes. https://t.co/FVbfrWT9be

Whoa. Look at the misinformation @TeenVogue is spreading on Snapchat. #2a #gunsense pic.twitter.com/JXsFQq3oNb

Defending "Allahu Akbar " while ridiculing "Thoughts and Prayers" should win back that giant chunk of middle America liberals have lost.

“Yes, I’m going to politicize the mass murder in Texas” -Guy telling others not to politicize NYC terror attack days ago pic.twitter.com/RRnIoXUIIn

Speaker Ryan, bluntly: shove your prayers up your ass AND DO SOMETHING WITH YOUR LIFE BESIDES PLATITUDES AND POWER GRABS https://t.co/ZJkO0Pa5Vh

I’m a secular activist. This tweet is probably one of the most disgusting sentiments I’ve seen expressed. I feel shame. Tweet credit: @wilw pic.twitter.com/eKZcR6QZ29

You have the Hollywood Left cranking out their insufferable drivel about firearms, while the liberal media starts the drumbeat on their tired and stale attacks on the National Rifle Association again. To compound their inability to grasp…anything, there are the bomb throwers on the Hollywood Left that are added into the mix. Wil Wheaton, of Stand By Me and Star Trek: The Next Generation fame, calling Speaker of the House Paul Ryan a “sack of s**t” for offering thoughts and prayers. GQ’s Keith Olbermann told Ryan to “shove his prayers up his hi ass.” Alyssa Milano thinks that there are no regulations on long guns whatsoever. Some members of the media don’t know that domestic abusers can’t own firearms. It’s this cacophony of liberal nonsense on firearms that should put you in the default position of neutral. Wait until the noise dies down, and then do your own research because they’re all following a script. We all know this.

There are no background checks on long guns (AR15s) in Texas.

Thanks for the info @shannonrwatts.

The other aspect of this horrific shooting in Sutherland Springs, Texas is the newfound terrorist experts, like Shaun King, who said that this was an act of terrorism. We don’t know that. We don’t even know Kelley's motivations. There was no note saying he supported ISIS, as in the case of Sayfullo Saipov in New York City, who did commit a terrorist act when he ran over scores of pedestrians and cyclists in Lower Manhattan last week. Eight people were killed and a dozen more injured. It’s not the act that makes it a terrorist action; it’s the motivation. Genocide is mass killing, but not every mass killing is genocide. There has to be evidence that a higher authority is ordering state-sanctioned murders of a specific ethnic or racial group in the hopes of said group being destroyed in whole or in part. Of course, the script here is to paint rural whites as unhinged because the insufferable, snobby, and condescending urban professional elite, who hates every thing and every person outside of the suburbs, has overtaken the Democratic Party. What The Daily Mail is reporting is that Kelley might have been an atheist, who thought people who believe in God were stupid. He would have fit right in with the progressive Left.

It’s going to be a helluva week. The same folks who chastised President Trump for politicizing the NYC attack are going to start politicizing this shooting because it’s their opportunity to take a swipe at the NRA, rural America, Christians, and white voters. On a side note, you should probably just tune out the lectures from the Hollywood Left since they’re having a bit of a rape problem with a slew of celebrities. They offer advice with one hand and grope with the other; take a hard pass on “the more you know” bulls**t they dish out on this tragedy or any future issue because they have zero moral authority. Everyone knew these creeps were running wild and everyone did nothing. It’s rot. It’s the legions of social rot taking swipes at us with these fights. We all see this and trashing people who offer prayers after this horrible event is a sure way not to win over voter that the Left desperately needs in order to be Trump in 2020. Instead, they’re just ensuring he gets that second term.

The nonsense is about to flow. The dam on liberal idiocy is about to break, but we’re on the high ground. Let the stupidity flow down stream, let law enforcement conduct their investigation of this horrific shooting, and wait and see what happens next. There’s no use getting your blood pressure to spike over the same drivel they’ve been peddling since Newtown. We all know how this ends on these gun policy fights: we win; they lose.

BONUS: Yep, they're wrong about everything:

“Classical liberal” is an accurate term for a person who supports New Deal economics and social modernity but does not identify as socialist https://t.co/2a6tGqkljh

UPDATE: And their narrative just died. A member of the NRA confronted and engaged Kelley with his own AR-15, wounding him during the exchange.