UPDATED: 26 People Reported Dead in Shooting at Church in Texas 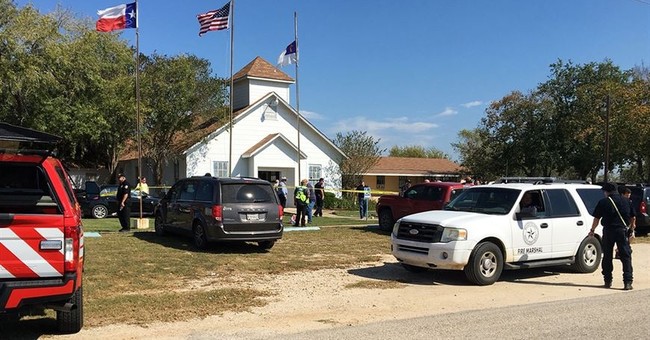 UPDATE (7:50 p.m.): Tim stepping in here for Christine. Below is an interview with Johnnie Langendorff, one of the heroes from today who helped stop the shooter.

UPDATE (6:55 p.m.): While it's still uncertain if Kelley killed himself or was killed by someone else, here's some updated information about what happened after the shooting.

After shooting up the church, a local man grabbed a rifle and pursued Kelley. Kelley then dropped his own weapon and fled. The two engaged in gunfight before Kelley was found dead in his vehicle.

BREAKING: DPS confirms the Sutherland Springs suspect "engaged in gunfight" with another citizen who tried to stop him. Cannot confirm if citizen killed him or if it was self-inflicted gunshot.

UPDATE (6:45 p.m.): Texas Gov. Greg Abbott said that 26 people were killed in Sunday's shooting, revising the death toll down by one. This is the deadliest mass shooting in the history of Texas.

TX Gov. says 26 people are dead after church shooting in Sutherland Springs, TX. He calls it the largest mass shooting in Texas history.

The shooter, Devin Patrick Kelley, was dishonorably discharged from the Air Force in 2014. (UPDATED: This is apparently not entirely accurate. Kelley received a "bad-conduct discharge," not a dishonorable discharge. Regardless, he had a domestic violence conviction, meaning he should not have been able to pass a background check. Matt wrote on that here.)

#New Per CBS News' Len Tepper: #SutherlandSprings shooter Devin Patrick Kelley was dishonorably discharged from the US Air Force in 2014

A person with a dishonorable discharge is prohibited from owning a firearm.

UPDATE (5:40 p.m.): Rep. Vicente González (D-TX) apparently fell for a 4chan hoax and identified the shooter as "Sam Hyde." This is not true.

Rep. Vicente González just repeated the well-known 4chan hoax that the shooter's name was Sam Hyde. That name is circulated EVERY shooting pic.twitter.com/Aa6juBf8oM

So far, all that has been identified about the shooter is that he's a white male in his 20s who lives outside San Antonio. Authorities are searching his home for explosives.

Pregnant women are among those killed.

UPDATE (4:55 p.m.): A Texas congressman said that the shooting is not believed to be connected to terrorism and that the shooter is not from the area. A press conference is beginning shortly.

UPDATE (4:15 p.m.): One of the deceased has been identified as the 14-year-old daughter of the church's pastor, Frank Pomeroy. Pomeroy said his daughter was a "beautiful, special child."

First Baptist Church Pastor Frank Pomeroy tells ABC his 14yr-old daughter is among the dead—Says she "was one very beautiful, special child"

Today's shooting is the deadliest mass shooting at a house of worship in modern U.S. history.

May God be w/ the people of Sutherland Springs, Texas. The FBI & law enforcement are on the scene. I am monitoring the situation from Japan.

As for the shooter, it is now being reported that he fled the scene in a vehicle before authorities caught up to him. It is unclear as to if he killed himself or if he was shot dead by police. There is still no word on his identity or motive.

This is just awful. 27 dead, 24 injured at a shooting in Texas church @CNN pic.twitter.com/WcUMN768kV

If these numbers are accurate, that means more than half of the church was killed in today's shooting.

Neighbors say they heard shooter may have reloaded multiple times, around 50 people usually at service pic.twitter.com/tkAYMp2Y8A

UPDATE (2:46 p.m.): The Wilson County commissioner is reporting that a possible 24 people are dead in the shooting, up from the original 10-15.

Texas Gov. Greg Abbott has offered his prayers to those affected.

Our prayers are with all who were harmed by this evil act. Our thanks to law enforcement for their response. More details from DPS soon. https://t.co/KMCRmOPkiM

Not much is known right now, but up to 15 people are feared dead after a man opened fire at First Baptist Church in Sutherland Springs, Texas. The man entered the church and began shooting around 11:30 a.m. Central on Sunday during services. Sutherland Springs is a very small town about 40 miles east of San Antonio. According to First Baptist Church's website, the church holds weekly services at 11 a.m. on Sundays.

Source in TX tells me as many as 10-15 dead in church shooting in Sutherland Springs, near San Antonio; suspect is down

Per witnesses at the scene, about 20 shots were fired. The FBI is currently on the scene.

JUST IN: Witness says as many as 20 shots fired at a church in Sutherland Springs, Texas https://t.co/ZC919cZoUC

According to the police, the shooter has been "taken down" and is dead. Currently, nothing has been released about the shooter or any of the victims, and there is no word on a motive just yet.

This is a developing story and will be updated as details become available.