Bloomberg: No, Trump Didn’t Drop The Ball On Puerto Rico 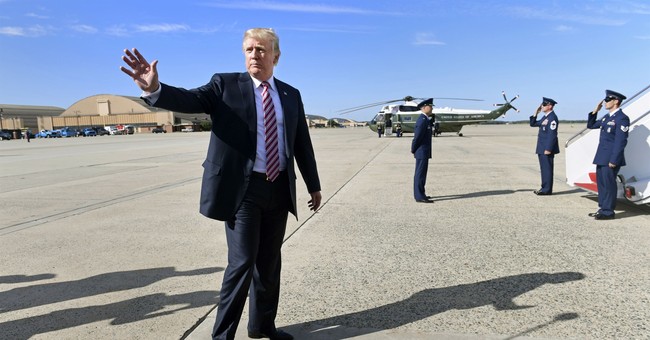 So, let’s circle back to Puerto Rico for a second. As the president visits the island today, yes, Trump and San Juan Mayor Yulin Cruz are engaged in a war of words. Yes, the media is bashing Trump over the response. They’re peddling fake news about Cholera on the island. Yet, that doesn’t seem to be the report card the island’s governor gave the Trump administration and we’ll get to that in just a second.  First, there’s Bloomberg’s interview with retired Navy Captain Jerry Hendrix, who is now with the Center for a New American Security. He told national security reporter Tobin Harshaw that Trump didn’t botch the response on Puerto Rico, though he did add that there was room for improvement. Also, he noted that for those pulling their hair out over what they perceive as a delayed response time regarding shipping aid, it takes time to reach the island. It’s not the best logistics-wise. That’s just a fact [emphasis mine]:

Tobin Harshaw: So, it seems like everybody has blasted Trump administration's response to the Puerto Rico crisis. Has that criticism been fair?

Jerry Hendrix: No, I don’t think so. First of all, there was a fair amount of anticipatory action that is not being recognized. Amphibious ships, including the light amphibious carriers Kearsarge and Wasp and the amphibious landing ship dock Oak Hill were at sea and dispatched to Puerto Rico ahead of the hurricane’s impact.

These are large ships that have large flight decks to land and dispatch heavy-lift CH-53 helicopters to and from disaster sites. They also have big well-decks -- exposed surfaces that are lower than the fore and aft of the ship -- from which large landing craft can be dispatched to shore carrying over 150 tons of water, food and other supplies on each trip. These are actually the ideal platforms for relief operations owing to their range of assets. The ships, due to their designs to support Marine amphibious landings in war zones, also have hospitals onboard to provide medical treatment on a large scale. That these ships were in the area should be viewed as a huge positive for the administration and the Department of Defense.

TH: Your plaudits toward the White House on all this are surprising to say the least. But where does the response still need to improve?

JH: One area in which the Trump administration could possibly lend additional assistance would be looking at a more robust activation of its assets in the Defense Department's Transportation Command to include more heavy-lift and cargo aircraft, as well as Maritime Administration shipping to move the logistics-heavy large infrastructure items on the ocean. Everything from bulldozers to transformers needs to come by ships, and it's been decades since it was really flexed to its full capacity. This would have the dual purpose of revealing any significant weaknesses in the Transportation Command assets and readiness should we need it in a military emergency down the road.

TH: Many critics feel that Florida and Houston had much better preparation before their storms hit this month. What could have been done better in advance in Puerto Rico, and what can be done in the rebuilding process to help minimize damage next time around?

JH: Puerto Rico is an island that suffers from its position in the middle of the Caribbean and its physical separation from the U.S. Its roads were in disrepair and its electrical grid was antiquated prior to the hurricane. The island has also suffered for years from ineffective local government and rising local territorial debt.

The Navy used to operate a large Navy base there, Naval Station Roosevelt Roads. I spent six months on the island in 1993, but when the island’s population protested the presence of the training range at nearby Vieques Island, the Navy shuttered the base, taking $300 million a year out of the Puerto Rican economy. I have no doubt that the federal government will be taking a hard look at large infrastructure investments and I hope that local governments look at building and general construction codes to make future buildings more hurricane survivable.

Also, another oddity in this whole Puerto Rican episode is that the mayor of San Juan has been made the face of this Trump criticism towards the response. Isn’t the governor, Ricardo Rossello, a Democrat, the authority on how the island is dealing with this disaster? Well, yes—but he said things like there was preemption, there was a pre-landfall declaration, with boats and other assets off the island—just like what Captain Hendrix said in his interview.

It’s just that the level of destruction is unprecedented. He also said that President Trump has been in constant contact with him, and that the federal government has been making resources available. That’s doesn’t work well with the anti-Trump media’s narrative that this is a total disaster, even borderline genocide. Yeah, some have been peddling that crap too.

So unbelievably irresponsible that these journalists are spreading completely unfounded claims of cholera in Puerto Rico. CDC says no way pic.twitter.com/ThvuAWuaJ5