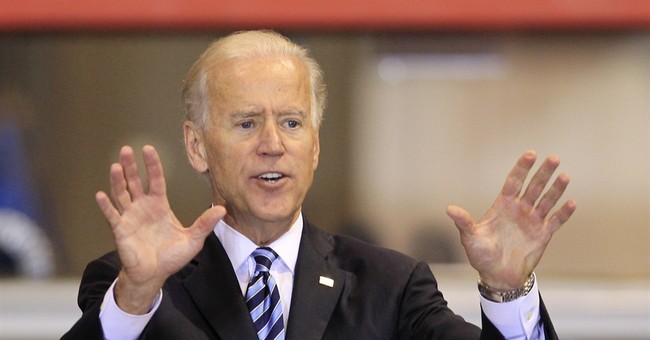 In the star search for a solid 2020 candidate, Democrats might have one in former Vice President Joe Biden. He has the experience. He’s well liked among Democrats, he can resonate with white working class voters, and he’s part of the Obama-era. He penned a strong op-ed in The Atlantic, which some saw as a sign that the former vice president is mulling a 2020 run. His daughter, Ashley, made the same overtures, but stressed that he still hasn’t made up his mind:

Former Vice President Joe Biden's daughter, Ashley, added more fuel to the 2020 speculation mill this week, saying that she thinks her father is considering a run for president.

Asked in an interview with Women's Wear Daily if her father will make a bid for the White House, Ashley Biden said, "I hope so."

However, she cautioned that he has not made up his mind yet and a decision on an actual run could be a ways off.

"Right now, his focus is on the (Biden) Foundation and Cancer Moonshot, as well as getting other Democrats elected. He's not there. He's taking it day by day after the loss of my dear beloved brother (Beau)," she said.

"He'll make a decision when that time comes," she continued. "A lot can happen in four years and we know this as a family. If he is in good health, knock on wood, and seeing what the landscape is at the time, yeah, I think he is considering it."

Could this be happening or will this be just be a lot of hype over nothing, as it was in autumn of 2015. Biden had allies set up super PACs and there was some chatter within the Obama White House about a Biden candidacy being better to carry on the legacy of Barack. In the end, by October of 2015, the vice president said that too much time had passed to mount a serious run, coming months after his son, Beau, passed away from brain cancer. While Biden previously said he wouldn’t mount a 2020 run, he’s now moved into the realm of the unknown. He’s launched a super PAC earlier this summer. He said he could have beaten Trump, and while he notes that Hillary Clinton would have made a good president—she was a terrible candidate. We’ll see what happens. Will identity politics that has engulfed the Democratic Party exclude Biden or any white guy from running? That’s what MSNBC’s Chris Matthews is asking at least. While Biden has the credentials, he’s also part of the establishment, which is something the more progressive base will probably balk at for 2020. Yet, after this, the real question for Democrats is who is a national contender who isn’t from the retirement home. It’s geezer world out there.