Chris Matthews: Can Democrats Even Run Two White Dudes In 2020? 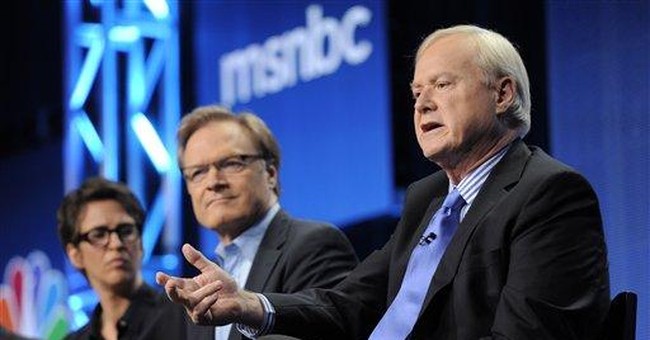 On Wednesday night, MSNBC’s Chris Matthews asked who could take on Donald Trump in 2020? As the Democratic Party leaves the Obama/Clinton-era—who can take on this tremendous task, with a party that has no message, no leader, and one that’s struggling to raise money. So, who can lead? Also, is it possible that the Democratic Party’s leftward shift and addiction to identity politics has made the idea of two white guys on the 2020 ticket anathema to its base? Anita Kumar, a reporter for McClatchy, Steve McMahon, a Democratic strategist, and Jon Brabender, a GOP strategist, weighed in with Matthews. Kumar noted that the party is moving left, and that yeah—there’s a reason why you’re seeing Sen. Cry Booker (D-NJ) and former Massachusetts Gov. Deval Patrick mulling 2022 bids. There is this need on the Democratic side for some balance, though she wouldn’t say definitively that two white men on the 2020 ticket is a deal breaker. Obviously, Matthews thinks so (via The Hill):

“But can the Democrats run, I’ll be blunt now, at this point in time in the 2020 election, can they run two white men given the nature, given the makeup of the party today?" Matthews asked after declaring that he believes former Vice President Joe Biden will run.

"Or does there have to be balance, gender balance, ethnic balance of some kind?”

"I think there has to be some balance. And I think on the Democratic side that's why you're seeing [New Jersey Sen.] Cory Booker and [former Massachusetts Gov.] Duval Patrick," said Kumar.

"Is it a deal-breaker if it's two white guys?" Matthews asked. "Because I think it is."

Brabender noted that non-college educated women in the Rust Belt voted overwhelmingly for Trump (62/34), and that the candidate Democrats should look for is one that can resonate in these areas, which would require a job-centric, pro-economic growth, and pro-infrastructure spending message. Democrats don’t want that; they want transgender bathroom advocacy, taxpayer-funded abortion with zero barriers, single-payer health care, and other nonsensical action items within the authoritarian orbit of identity politics. Matthews added that Democrats also were banking on college-educated women to get them over the top. That didn’t work.

Matthews also thinks former Vice President Joe Biden is running, and that if there should be a balance—maybe Sen. Kamala Harris (D-CA) could be a good pick. The problem is that there’s a lot of time between now and 2020, and by mentioning time, I mean the duration it could take the Bernie Sanders wing of America to whittle her down to a nub. They simply do not like her. The reason: she’s a little to close to Wall Street.

What about age? Kumar disagreed with the notion that age is a factor, given how old Trump and Clinton were in the last election. Yet, it could become an issue based on McMahon’s suggestion regarding a Biden/Harris ticket, which would be for Biden to promise to serve only one-term, which could bring up age if Biden is running. The 2018 midterms haven’t even begun yet. We have time to debate this, but the fact that we’re questioning whether one’s race is a disqualifying factor in presidential politics because Democrats have made shunning white voters, the vast majority of the electorate, their pastime—that’s not a good sign.

UPDATE: Speaking of white dudes on the 2020 ticket, could JP Morgan’s Jamie Dimon be a contender? He’s bee in Washington a lot more recently, but his closest aides say he’s not interested. There’s a lot of time between now and 2020, but a banker heading the 2020 ticket— talk about a progressive revolt. We’ll see what happens (via Reuters):

The 61-year-old banker has made more than a dozen trips to Washington so far this year to press a broad agenda with a range of influential policymakers, people who attended the meetings or are familiar with his schedule said. Dimon has already visited the nation’s capital four times as much as he does in a typical year.

Dimon has said in the past that the only big job he would want would be U.S. president, but also said running for office would be impractical. Associates told Reuters he has abandoned the idea entirely, and only became more active in Washington because he was worried about his bank, the economy and the future of the country.

He was around so much during the summer that Washington regulars said it was no longer surprising to see Dimon pop out of the Capitol Hill subway system or leave a lawmaker’s office. He has joked with staff about getting a condominium in Washington because of how often he travels there, one person said.

Although Dimon’s meetings typically center on topics like tax reform or financial rules, he is not shy about weighing in on issues ranging from immigration to education and criminal justice reform, those familiar with the discussions said