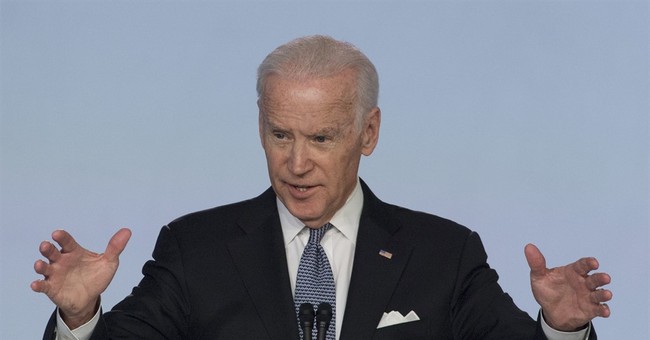 Kill the rumors: Vice President Joe Biden is not running in 2020. For starters, the former vice president would be pushing 80 and possibly not willing to mount another national campaign in a climate that’s unpredictable, with a fractured party that is united on its goal—opposing Trump—but clawing each other's eyes out when it comes to executing its plan of attack. Mr. Biden made his 2020 plans explicitly clear at the 100 Dinner Club in Manchester, New Hampshire. At the same time, he isn’t completely stepping away from his political life (via Boston Globe):

Speaking at the 100 Club dinner, Biden acknowledged that the trip to the state that holds the first presidential primary raised eyebrows, but he said he was not there as a candidate: “Guys, I am not running.”

That was the only time Biden addressed his future during hourlong remarks to 800 people in a Manchester ballroom, and he mentioned President Trump only in passing.

Instead, he spent most of his time talking about three values that he believes are not part of the national conversation today: dignity, optimism, and the willingness to do big things.

In addition to his appearance in New Hampshire, he will keynote a major fund-raiser for New York Governor Andrew Cuomo, address a Florida Democratic fund-raiser, and give a series of commencement speeches, including at Harvard’s Class Day.

Biden did voice regret at not running back in March, where the former VP claimed that he could have won the primaries and beaten Donald Trump. He said he was the best qualified, which isn’t a falsehood. On paper, yes—Biden was probably the best-qualified candidate who didn’t have any political baggage. At the same time, he didn’t run. When he announced in October of 2015 that he planned to sit this election out, he said the timetable was too close, etc., but now says that he had planned on running. It was a tough decision personally however.

With his son Beau living what would turn out to be his last days due to brain cancer, you could see how Biden wouldn’t necessarily be putting a rush on this decision. Moreover, the vice president said he enjoyed spending time with his son in his final months. While Democrats rejected Biden twice before, he does have blue-collar appeal, he’s popular, and he’s definitely someone who could peel off Trump voters. I think he would be someone who would have a laser focus on jobs, pension protections, infrastructure, etc. - all the issues that Democrats didn’t really talk about in 2016. Alas, that’s not going to happen, though that doesn’t mean Mr. Biden won't be out there energizing the Democratic base and headlining fundraisers, as he’s doing already, that could raise boatloads of cash for Democrats in 2018 and 2020. I would say Obama could be in that mix as well, as he’s proven to do well with white working class voters, denying Romney the ability to run up the score in rural areas of the Rust Belt in 2012, but his gravitation towards accepting high six-figure speaking engagements, including ones from Wall Street, could cool his reception among base voters and undercut a more populist-leaning message from the Left. It’s one of the issues that undercut Clinton’s perception of authenticity.

It boils down to this: How can you really understand my economic situation when you make more than I ever will in my lifetime for a 20-minute speech?

No wonder why some progressive Democrats find Obama’s $400,000 speaking engagements to be disconcerting. Maybe Joe would be their go-to white working class outreach ambassador from Scranton, PA? Yet, that means putting other politically correct initiatives on hold. Good luck selling that to urban-based liberals.