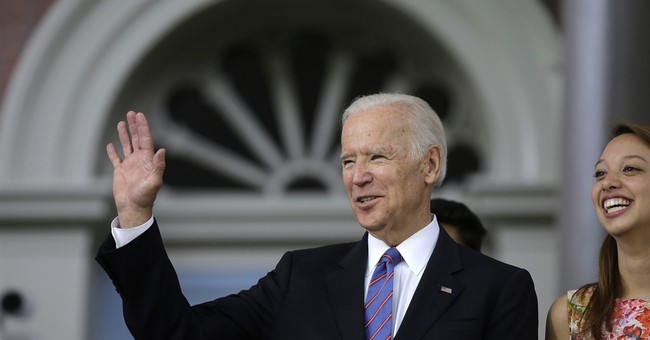 I know I said the rumors should be killed. Hey, former Vice President Joe Biden said he wasn’t running again. Then again, he has said that he could’ve beaten Trump. In Las Vegas, the vice president changed his tune, saying that he very well may run again, though he has to pay off the mortgage first—a cute touch. Biden made these remarks during a hedge fund conference, where he gave a yes, no, or maybe so attitude towards a 2020 campaign. He also said that Hillary Clinton was a bad candidate, but added that she would have made for “a really good president.” The former vice president added that he thought himself as a great 2016 candidate.

It seems that the Biden family is not set on 2020 and that’s fine. We’re a long ways away from that juncture. We’re not even at the midterms yet. So, what’s the deal with his political action committee (via NYT)?

Former Vice President Joseph R. Biden Jr. is planning to create a political action committee, the most concrete sign yet that he intends to remain active in the Democratic Party and is considering a presidential bid in 2020.

The “American Possibilities” PAC, which Mr. Biden intends to unveil on Thursday, will offer the former vice president a platform he can use to nurture relationships with donors, travel on behalf of the party and contribute to candidates in the two governor’s races in November and in next year’s midterm elections.

He has tapped a former aide in his vice-presidential office and a veteran of President Barack Obama’s White House campaigns, Greg Schultz, to help lead it.

By creating a political organization, Mr. Biden, 74, is also sending an unmistakable message to the many other Democrats eyeing the White House that he is not planning to quietly recede into retirement.

“Biden has a lot of support out there, and this gives him a way to grow that support while also helping Democrats win and build the party,” said Stephanie Cutter, a veteran Democratic strategist who was not privy to the planning of the PAC.

No doubt that Joe Biden resonates with voters. He’s popular. He’s likable. He may run his mouth a bit, but he is someone who can connect with the white working class. He’s a good debater as well. The problem is that he’s run for president twice—and has failed twice. His first run was torpedoed by a plagiarism accusation that he lifted lines in speeches from then-UK Labour leader Neil Kinnock. The 2008 Biden campaign just couldn't get any traction, as Hillary Clinton and Barack Obama were soaking up all the energy, money, and grassroots energy. Could 2020 be different? Biden will be 78 years old if he runs. What about Bernie Sanders? He could toss his hat into the ring again. He too did well with white working class voters, a slice of voters Democrats have to be competitive with again—and most importantly garnered the adoration of the Obama coalition. Young voters were feeling the Bern. They did not feel the same way about Hillary, but Sanders is facing an age issue too. Like Biden, he would be close to 80—79 years old to be exact—when 2020 rolls around.

You can see the problem here. The cream of the Democratic Party’s candidate pool has devolved into the geriatric brigade. With Republicans dominating state and local elections, the chances of that talent pool being replenished worsen with every election cycle. Others have seen this problem with the Democratic Party as well. The New York Times’ Nicholas Confessore said earlier this month that all this Biden speculation shows the Democrats’ thin bench for the next presidential election. In the meantime, the Democrats have another war chest to tap into for the 2018 midterms. Hillary Clinton—who in the words of NRO's Kevin Williamson is one half of the couple who have proven to be the "penicillin resistant-syphilis of American politics"—has also launched her own super PAC dedicated to fighting Trump’s agenda and helping 2018 midterm candidates.

ADL Went Ahead and Changed Definition of 'Racism'
Townhall
Mary Katharine Ham and Karol Markowicz vs. the American Academy of Pediatrics on masking kids. Who you got?
Twitchy
Adam Carolla Perfectly Points Out How Dumb Our Society Has Become
Redstate
Biden's DOJ Thinks BLM Criminals Deserve Lesser Sentences
PJ Media