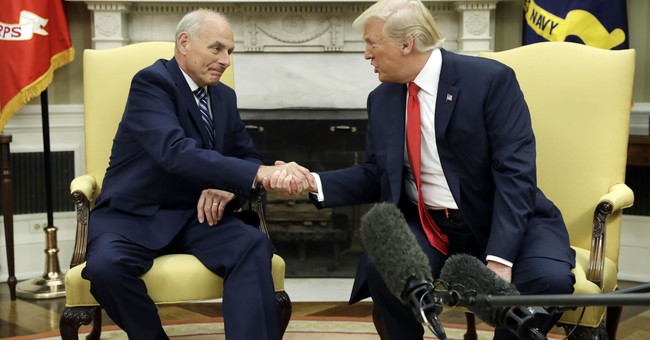 Rep. Luis Gutiérrez (D-IL) went off the hinges on President Trump’s Chief of Staff Gen. John F. Kelly, saying he was a “disgrace to the uniform” over the administration’s decision to phase out the Deferred Action for Childhood Arrivals program. The program shields illegal aliens who entered the U.S. as minors from deportation if they meet certain requirements. Prior to becoming White House Chief of Staff, Kelly was the secretary for the Department of Homeland Security, who rescinded the Deferred Action for Parents of Americans and Lawful Permanent Residents (DAPA) program, which also began under Obama.  There’s a six-month enforcement delay, meaning that Congress will have to act if they want to help out the nearly 800,000 illegals that benefit from DACA. Yet, Gutiérrez’s remarks did no go unnoticed.

On Wednesday, Hugh Hewitt interviewed Sen. Lindsey Graham (R-SC), who ripped the Democratic congressman, calling his remarks “deplorable.” Even Hewitt had to ask what the hell is wrong with people, given that Kelly is a decorated former officer in the Marine Corps, and a Gold Star parent, having lost his son, Lt. Robert Kelly. Graham added that Kelly also headed Southern Command, so he has a grasp of the issues that are related to border security.

Hewitt and Graham agreed that this was an egregious slander and for what? Everyone knows DACA was unconstitutional. People know that they just can’t leave 800,000 people hanging in the balance, even conservative Republicans, like Tom Cotton (R-AR), know that, which is why they want to pass their green card overhaul legislation, the RAISE ACT, in concert with legalizing the 800,000 DACA recipients who are already here. Graham noted the same thing, saying that the president gave Congress six months to get something done on this, which is how this should have gone from the beginning on this matter. Below is a partial transcript of the interview [emphasis mine]:

HUGH HEWITT: Well, I want to begin with, this is a very troubling story. Yesterday, Luis Gutierrez of Chicago said, and I quote, “General Kelly is a hypocrite who is a disgrace to the uniform he used to wear. He has no honor, and he should be drummed out of the White House along with the white supremacists and those enabling the President’s actions by ‘just following orders’”, which of course is a reference to the Nazi defense at Nuremburg.

HEWITT: General Kelly served 46 years. He’s a Gold Star father. His son, Lt. Robert Kelly, was killed in action in the war. What is wrong with people?

GRAHAM: Well, you’re giving his criticism more weight than it deserves. You know, I know him, and he’s very emotional about immigration reform. What he said about General Kelly is just completely wrong, and quite frankly, deplorable. Here’s where we are. We’re a nation of laws. It was clear to me that DACA would not meet a Constitutional test in court. DAPA, the executive action for the parents of the Dream Act kids fell in court. The ten attorneys general, Republican attorneys general, were going to sue that DACA was unconstitutional. They were going to win. And the President made a good decision by saying I’m going to end the program, but I’m going to give Congress six months to fix the problem. So what I would say to Mr. Gutierrez, sit down with a Republican in the House and try to find a solution instead of slandering General Kelly.

HEWITT: It is a slander. I just don’t understand what has happened to the city. It is possible, everybody knows it’s an unconstitutional executive order.

HEWITT: And everybody knows we have to take care of 800,000 Dreamers.

HEWITT: But you can’t get there by slandering an American hero who has made the ultimate sacrifice of his own son.

GRAHAM: Well, let’s just put it this way. The slander against General Kelly says more about Mr. Gutierrez than it does General Kelly. And what Luis Gutierrez says or does is not going to be outcome-determinative. General Kelly will be a leader here. Name one person in the country more qualified to talk about border security than John Kelly. He was head of Southern Command. He understands this issue backwards and forwards. So there’s a deal to be made. Donald Trump is a deal maker. This is his time to shine. We all know that 800,000 kids are sympathetic in the eyes of most Americans. They have no other country to go to. America is their home, for all practical purposes. They can stay here. They can become citizens on our terms. We have a very rigorous process to keep them here and let them become citizens. If you deported them, you’d hurt the economy. But if you gave them legal status and didn’t address border security, you’re incentivizing more illegal immigration. So you have to do two things at once. You have to deal with the plight of the Dream Act kids, but you also have to start making a down payment on fixing the broken immigration system. So Mr. Gutierrez, would you agree to a robust security, border security plan for the Dream Act? If you don’t, then you’re basically, you’re the one trapping these kids into a bad life, not me, because we need to do two things – take care of the Dream Act kids and secure our border.

Remember when the media went insane when Trump went after Khizr Kahn, who is another Gold Star parent, after his speech condemning the then-Republican candidate at the Democratic National Convention? It was warranted by the way, but I don’t think we’ll see the same level of intensity and condemnation on this one. Oh, it's yet another double-standard within the news media–shocker.