Dem Rep Who Never Served: Kelly Is a 'Disgrace' to His Uniform 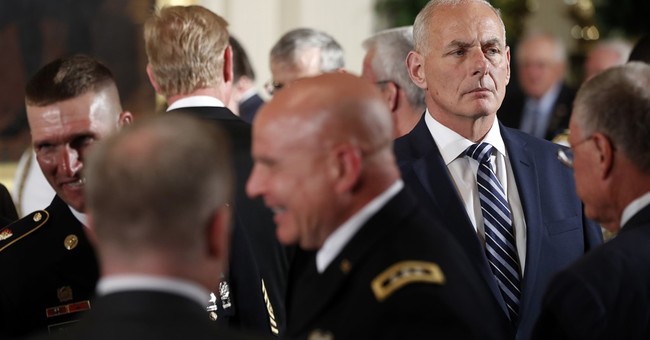 Rep. Luis Gutiérrez (D-IL) is directing his anger over President Trump's DACA decision at White House Chief of Staff John Kelly. In a statement Tuesday shortly after learning Trump had decided to end the Deferred Action for Childhood Arrivals program with a six-month delay, Gutiérrez insisted Kelly lied straight to his face.

“General Kelly, when he was the head of Homeland Security, lied straight to the faces of the Congressional Hispanic Caucus about preventing the mass deportation of DREAMers.  Now as Chief of Staff, this former general is executing the plan to take away their lifeline and taking steps to criminalize young people who live and work here legally.  General Kelly is a hypocrite who is a disgrace to the uniform he used to wear.  He has no honor and should be drummed out of the White House along with the white supremacists and those enabling the President’s actions by ‘just following orders.’"

Rep. Luis Gutierrez (D-Ill.), who never served, on Gen. Kelly, a man who served 46 yrs and lost his son to combat. https://t.co/oj53bob4nc pic.twitter.com/wdAaxfeUPk

Does Szoldra have a point? Does Gutiérrez have any right to question this retired Marine General's service?

Gutiérrez, like many DACA defenders (which includes some Republicans) are incensed that Trump is rolling back yet another of his predecessor's policies. President Obama introduced DACA via executive action in 2012. The law prevents the deportation of illegal immigrants who came to the U.S. as minors, through no fault of their own, proponents note.

Critics, on the other hand, argue Obama's circumvention of Congress was unconstitutional.

In September, Congress is expected to vote on legislation to fund the government. Gutiérrez said he "personally will not support any funding bill that does not include a safe harbor for DREAMers." He intends to tell his fellow Democrats to join the resistance.