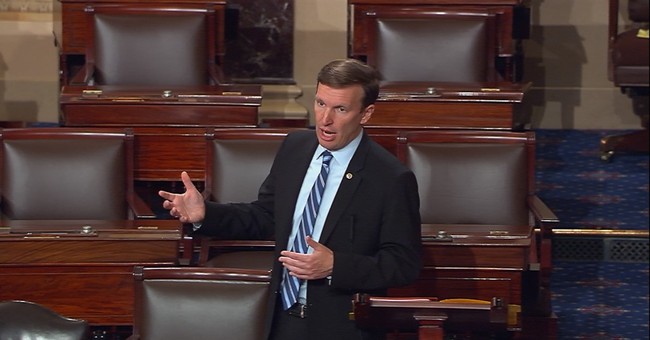 Well, even in deep blue states, like Connecticut, its congressional representatives know the limits of this impeachment nonsense that’s being pervasively drummed up by the progressive Left.  Sen. Chris Murphy sat down with WFSB3’s Susan Raff, who asked the senator to comment on the recent accusations that Trump may be mentally unfit and possibly unstable. In other words, comment on the same anti-Trump crowd who still can’t stand the fact that he won the 2016 election.

Raff and Murphy acknowledged that these are loaded accusations, but the Connecticut senator said that there really isn’t much daylight between Trump as president and Trump the candidate, which is not an impeachable offense.

“I don’t see President Trump acting very differently as a President than he did during the campaign,” he said. Murphy added that his speeches during the 2016 campaign are just as “bizarre,” as they are while he’s occupying the Oval Office.

“He did win the Electoral College despite this bizarre behavior as a candidate. So, you can’t impeach somebody for doing what they said they were going to do as a candidate,” he added. “And whether we like it or not, he is fulfilling all of the very reckless promises or trying to fulfill some of the reckless promises he made during the campaign.”

Concerning the questions about stability, Murphy said that he doesn’t feel Trump is acting in a way that befits the office, and that he worries how he would respond if this nation were facing a real national security threat. For now, the president is busy trying to figure out how to deal with Hurricane Harvey that slammed Texas’ Gulf Coast.

Yet, there you have it. Even a hard-core liberal, like Murphy, knows that you cannot impeach someone for merely winning an election. His campaign promises, while he views them as “reckless,” are not impeachable offenses. He may not act like you want him to act as our Head of State, but all of liberal America felt that way about George W. Bush and we’re all still here. This all boils down to personality. You either love Trump or hate him. There’s no in-between. That’s fine, but again, hardly something worthy of wasting Congress’ time on impeachment proceedings. Also, Sen. Murphy, winning the Electoral College is winning the election, so even here there’s a tinge of the not accepting the 2016 results with the whole “Hillary Clinton won more popular votes,” which means nothing, by the way.