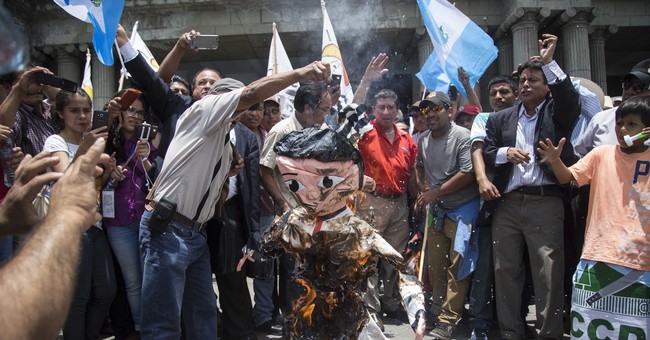 Tahoe Resources has been caught in legal limbo with Guatemala’s Supreme Court over a rather odd oversight concerning indigenous peoples. The company was mining silver in the country, which was shut down by the legal system on the allegation that they didn’t consult the local tribes. The problem is that the last census taken in Guatemala showed that no indigenous peoples lived in the immediate area. The stop order torpedoed the stock of Tahoe and threatened thousands of jobs at the work site. The Nevada-based resource company has been trying to get things back to normal, but so far—there’s been no success. Right now, workers are going on hunger strike until the mine is re-opened by the courts. The strike began last Wednesday (via Prensa Libre):

The group is concentrated at the substation of the National Civil Police in the center of San Rafael Las Flores, Santa Rosa, where, they say, they will remain until the Court of Constitutionality resolves the appeals filed by the company to continue operating in that region.

Henry Ruiz, an affected employee, said he and a group of his colleagues made the decision on their own and that the company has nothing to do with this measure.

"We took this measure to make the authorities of the Constitutional Court aware of the fact that we are thousands of employees affected by the resolution issued last days by the Supreme Court of Justice," said Ruiz.

He added: "We are about 1,800 workers affected, in addition there are contractors and suppliers, I am originally from Cobán, Alta Verapaz, I had to bring my family. My desperation increases as I do not have work. "

Sen. Dean Heller (R-NV) has sent a letter to Secretary of State Rex Tillerson to help resolve this matter. For now, it could be a long time, as this isn’t a primary action item for Guatemala’s Jimmy Morales. The Guatemalan president could be moving his nation towards a constitutional crisis after he decided to axe an anti-corruption panel sanctioned by the United Nations that was starting to look into him (via NYT):

Guatemalans elected a former television comic as president in 2015 on promises he would be honest, unlike his reviled predecessor. But on Sunday, in a move that sent Guatemala lurching toward chaos, he ordered the head of a United Nations-backed anticorruption panel expelled after it began moving against him.

The decision by President Jimmy Morales to go after a panel he had once readily accepted was a head-spinning turn for Guatemala, which is regarded as one of Latin America’s most corrupt countries but which also appeared to be making progress toward accountability.

Hours after the president’s expulsion order, Guatemala’s Constitutional Court temporarily blocked it. The ruling will force Mr. Morales to back down or to defy the country’s top judges.

The anticorruption panel is led by Iván Velásquez, a Colombian prosecutor who has spearheaded a series of political corruption inquiries since he arrived in Guatemala four years ago. Mr. Velásquez and Attorney General Thelma Aldana said late Friday that they would seek to strip Mr. Morales of his immunity from prosecution, alleging that he had failed to report anonymous contributions to his campaign.

“One of the bedrock principles of a constitutional system is that no one is above the law.  I urge President Morales to change course, respect the Constitutional Court, and allow Ivan Velasquez to continue his important work supporting Guatemalan authorities fighting high levels of corruption.

“The U.S. Congress has spoken with one voice in support of the International Commission against Impunity in Guatemala.  We will continue to stand with the Guatemalan people, and especially those in poverty, who are hurt most by corruption.”

We should bet on this matter not being resolved soon.