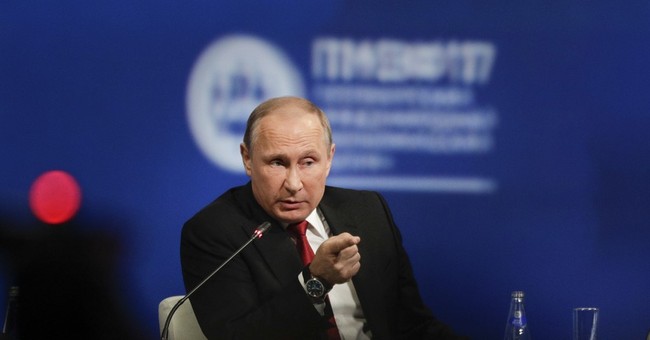 Special Counsel Robert Mueller has expanded the scope of his investigation into Russian activities during the 2016 election to include former Trump campaign manager Paul Manafort and it could soon involve Attorney General Jeff Sessions as well. Former FBI Director James Comey, who was fired by President Trump earlier this month, is set to testify before the Senate Intelligence Committee next week about possible undue influence that might have been exerted concerning the ongoing federal investigation into former National Security Adviser Michael Flynn. Russian interference activities will also be discussed. Mr. Comey drafted a memo, whose existence was confirmed by Fox News, about ways in which the president acted improperly to influence the investigation. Mr. Comey’s dismissal has spurred some Democrat to hurl obstruction of justice allegations against the president.

Now, Bloomberg is reporting that the Trump administration is mulling invoking executive privilege to block the former FBI director’s testimony.

The White House is reviewing whether to invoke executive privilege to prevent former FBI Director James Comey from testifying before a congressional panel next week.

Comey is scheduled to testify Thursday before the Senate Intelligence Committee about his May 9 firing by President Donald Trump. The panel is investigating Russian meddling in the 2016 presidential election and whether the president or his associates were involved.

Asked Friday if the White House might invoke executive privilege, Press Secretary Sean Spicer told reporters: "That committee hearing was just noticed, and I think obviously it’s got to be reviewed.”

Also, with our old Cold War enemy being the obsession of the Democratic Party, Hillary Clinton, and the liberal news media, Russian President Vladimir Putin told NBC’s Megyn Kelly that American hackers might have framed Russia:

Russian President Vladimir Putin found himself on the defensive Friday when asked by NBC News' Megyn Kelly to explain his earlier claim that private "patriotic" hackers could have interfered in the 2016 U.S. presidential election.

Putin, in an exclusive interview with Kelly, insisted the hackers could have come from "anywhere" and then they could have — in a savvy and professional way — shifted the blame to make it look like Russia was behind the hacking.

Hackers can be anywhere. They can be in Russia, in Asia...even in America, Latin America," he said. "They can even be hackers, by the way, in the United States who very skillfully and professionally shifted the blame, as we say, onto Russia. Can you imagine something like that? In the midst of a political battle?"

"By some calculations it was convenient for them to release this information, so they released it, citing Russia," Putin added. "Could you imagine something like that? I can."

President Trump announced this week that we would withdraw from the Paris Agreement on climate change, which sent the Left into another fit of rage, but I'm sure they'll circle back to this, their favorite issue. The full interview with Putin will air on Sunday evening.