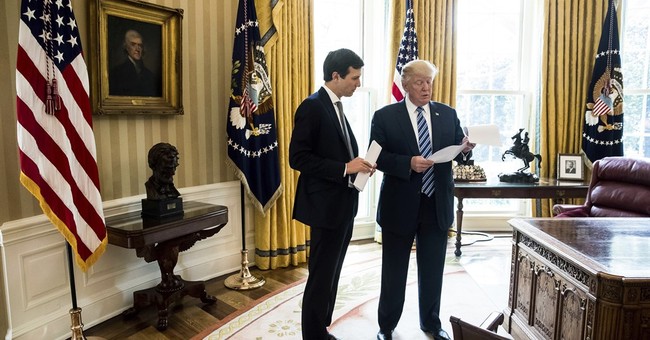 It has not been a good week regarding Canadian-American trade relations. That was the sentiment echoed by Commerce Secretary Wilbur Ross. As Katie wrote yesterday, President Trump is asking for a 20 percent tariff on Canadian lumber. It’s no secret that Trump thinks that the North American Free Trade Agreement is a serious problem, one that has hamstrung America’s working class since President Bill Clinton signed it in the 1990s. Politico is reporting that the Trump administration is readying an executive order to withdraw from the free trade agreement, though it could be a tactic to bring both Canada and Mexico to the bargaining table. Canada has signaled that they will push back against this lumber tariff, while Mexico is still angry over Trump’s proposed border wall:

The Trump administration is considering an executive order on withdrawing the U.S. from NAFTA, according to two White House officials.

A draft order has been submitted for the final stages of review and could be unveiled late this week or early next week, the officials said. The effort, which still could change in the coming days as more officials weigh in, would indicate the administration’s intent to withdraw from the sweeping pact by triggering the timeline set forth in the deal.

Peter Navarro, the head of Trump’s National Trade Council, drafted the executive order in close cooperation with White House chief strategist Steve Bannon. The executive order was submitted this week to the staff secretary for the final stages of review, according to one of the White House officials.

The draft executive order could be a hardball negotiating tactic designed to bring Mexico and Canada to the table to renegotiate NAFTA. But once Trump sets the withdrawal process in motion, the prospects for the U.S. pulling out of one of the largest trade deals on the globe become very real.