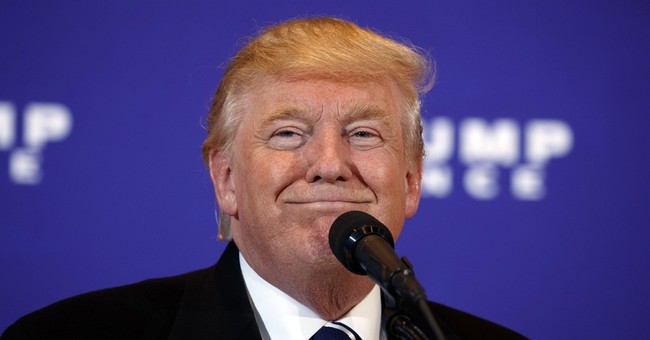 Guy has been writing about the tightening of the polls, especially how Donald Trump is within striking distance of Hillary Clinton in Pennsylvania, trailing her by only four points. The Keystone State constitutes of base of the Democrats’ famous blue wall in the northeast, but Real Clear Politics has changed the state’s designation from lean Clinton to toss-up. They also moved Virginia and New Hampshire into the toss-up column.

Again, was this because of the FBI bombshell that was dropped last Friday that disclosed that they will be reviewing another 650,000 emails from Huma Abedin? Katie wrote that the polling hasn’t changed regarding this event. In Pennsylvania, Monmouth polling found that the shift towards Trump began before the bureau’s announcement last week (via Philadelphia Inquirer)

Clinton, a Democrat, holds a four point lead over Republican Donald Trump heading into the final days of the presidential campaign -- 48 percent to 44, the poll found -- down from her 10 point advantage in October. (A CNN poll released Wednesday found an identical 48-44 split in Pennsylvania).

The poll, however, found little impact from the news Friday that the FBI has renewed its investigation of emails related to Clinton's time as secretary of state. The survey, conducted this week, found that only 4 percent of likely voters said the development caused them to change their minds, and their shifts changed the margin in the presidential race by no more than one percentage point, the poll found.

"It looks like this shift was in the works even before Friday's FBI bombshell, which has made only a small contribution to this overall narrowing," said Patrick Murray, director of the Monmouth University Polling Institute.

CNN expounded on the avenues to 270 for Trump. They include a silent majority of white working class voters that could nab him Michigan and Wisconsin, or low African-American and Latino turnout that could see him win New Mexico, Colorado, and Michigan. The news network also noted that should Libertarian Gary Johnson siphon votes away from Clinton, Colorado and New Hampshire could be added to the GOP column. All of which are tall orders, but momentum seems to be flowing in Trump’s direction. The question is did this momentum begin too late. The upside of this is that the GOP is shoring up its position down-ballot. The most likely path to victory is if Trump is able to win North Carolina, Ohio, Nevada, New Hampshire, and Maine's second congressional district. It's a tough road ahead five days from Election Day.