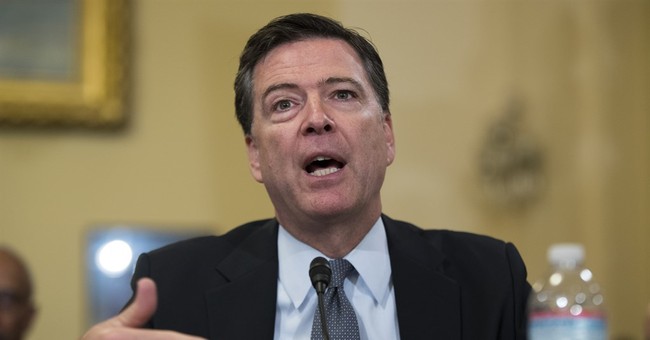 A former spokesperson for the Department of Justice was not happy that FBI Director James Comey announced that the agency is going to review more emails from Hillary Clinton, though they're not from her—nor is it related to anything from Wikileaks. As Guy and Christine noted, it was the FBI’s probe into Anthony Weiner’s sexually explicit online interactions with an underage girl. Nevertheless, Matthew Miller took to Twitter to rip Comey for disclosing this information, citing it as an abuse of power (it’s not the first time he’s made this allegation). Also, he alluded that this news development could influence the election (via Politico):

Matthew Miller, who served at the Department of Justice under Attorney General Eric Holder, blasted Comey's move in a 14-post spree on Twitter Friday afternoon, ripping the FBI director for his practices throughout the entire Clinton investigation. Miller said Comey “flagrantly violated DOJ rules” by holding a press conference in July to announce that he was recommending against charges for the former secretary of state, a decision the FBI director said at the time that he made in the interest of transparency.

But today's disclosure might be worst abuse yet," Miller tweeted, adding that in his experience, the Justice Department “goes out of its way to avoid publicly discussing investigations” when elections are close.

Miller said those precautions are not just limited to public statements, writing that the department often avoids sending subpoenas or taking other steps that might become public until an election is over.

The Justice Department does that, he said, “because voters have no way to interpret FBI/DOJ activity in a neutral way.” Miller wrote that the new information being reviewed by the FBI “might be totally benign & not even involve Clinton. But no way for press or voters to know that. Easy for opponent to make hay over.”

FBI is undoubtedly investigating links between the Russian hack, Manafort, & the Trump campaign. But aren't commenting on it. Good! 11/

Which takes us back to the original rule: you don't comment on ongoing investigations. Then multiply that times ten close to an election. 9/

This might be totally benign & not even involve Clinton. But no way for press or voters to know that. Easy for opponent to make hay over. 8/

They shouldn't be commenting on investigations! But that should apply to all. Instead Clinton consistently treated differently/worse. 12/12

But today's disclosure might be worst abuse yet. DOJ goes out of its way to avoid publicly discussing investigations close to election. 5/

This is such an inappropriate public disclosure by Comey. And sadly the latest in a long string of them. https://t.co/8MgrH9UKlR

Still, there are some who feel that this disclosure was necessary. David Gergen at CNN noted after Hillary Clinton’s brief press conference earlier tonight that it was the right thing for the FBI to disclose this development, but added that more details should be released since the letter left the public dangling. Benjamin Wittes of Lawfare blog agreed with the disclosure as well, noting that the FBI and Comey will be accused of playing politics no matter what they did, especially if they decided to tell us that they found thousands of emails relating to the Clinton email probe and sat on it until after the election.

If you're inclined to be angry with Comey over this, imagine that he had not said something and it emerged after the election that, having testified that the investigation was complete, he authorized additional investigation of a new trove of emails.

Comey and the FBI are in a terrible position here, one in which they would be accused of playing politics whatever they ended up doing.

But what you can't reasonably say here is that Comey has been anyone's political lackey. Over the howling objections of many Republicans, he ended the Clinton email investigation, concluding that "no reasonable prosecutor" would go forward with a case. Over the snarls of the Clinton forces, at the same time, he commented quite disparagingly about the behavior of the woman who is likely to become his boss. And now, with the election only days away, he has amended his prior resolution of the case to deal with new information.

Say what you will about the FBI, but it's surely been independent.

We’ll see what comes of this reload of the FBI’s probe into these emails, but for now—enjoy liberals freaking out over this development.