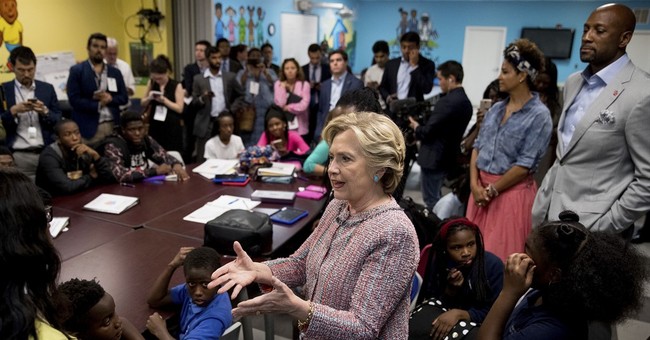 Last night, CNN reported on the latest find in the Wikileaks information dump taken allegedly from Clinton campaign chair John Podesta’s emails, showing possible collusion between the Department of Justice and the Clinton campaign over a lawsuit regarding her email server. The news network added that the hearing that Clinton spokesperson Brian Fallon, who previously worked at DOJ, mentions in the email exchange was public knowledge (via CNN):

Trump seized on hacked emails released by Wikileaks that purport to show Clinton spokesman Brian Fallon communicating with the DOJ regarding a FOIA lawsuit in 2015, and said they showed collusion between Clinton and the Obama administration regarding its email investigation.

"The DOJ fed information to the Clinton campaign about the email investigation so that the campaign could be prepared to cover up for her crimes," Trump said, at a rally in Panama City, in Florida's deeply conservative panhandle. "This is collusion and corruption of the highest order and is one more reason I will ask my attorney general ... to appoint a special prosecutor."

The communication between Fallon and the DOJ, revealed by WikiLeaks, only concerned the FOIA lawsuit, and not the investigation into Clinton's email use. There is no evidence DOJ communicated with Fallon on other issues, including its email investigation.

Frankly, there are other areas of the email scandal, like the FBI finding almost 15,000 more emails, including 30 that related to Benghazi that the former first lady deleted and didn’t turn over. The State Department IG report that noted Clinton didn’t approach officials about a private email arrangement and if she had—it’s setup would not have been approved. Moreover, she also was worried that her personal emails would be accessible, which negates her convenient talking point as to why she had this private email arrangement in the first place. That email highlighting that point was also never turned over, once again feeding into the narrative that the Clintons are secretive, untrustworthy, and dishonest.

Yet, the network also touched on excerpts from Clinton’s speeches to Wall Street executives, which she has kept a tight lid on until now. The campaign has not disavowed anything relating to third document dump other than pushing this absurd narrative that Donald Trump and Russian President Vladimir Putin are coordinating with one another, and that the Russians are the ones spilling this information. There is zero evidence to back up this Manchurian Candidate acid trip of a talking point. CNN added that the Wall Street transcripts show that Clinton was very supportive of open borders and free trade, and having those in the financial sector craft the new regulations to avert a second financial crisis; a view that is viewed as anathema to the progressive left headed by folks like Sens. Elizabeth Warren (D-MA) and Bernie Sanders (I-VT). Sounds like this is the type of stuff that could seriously damage her candidacy, especially when she was duking it out with Sanders.