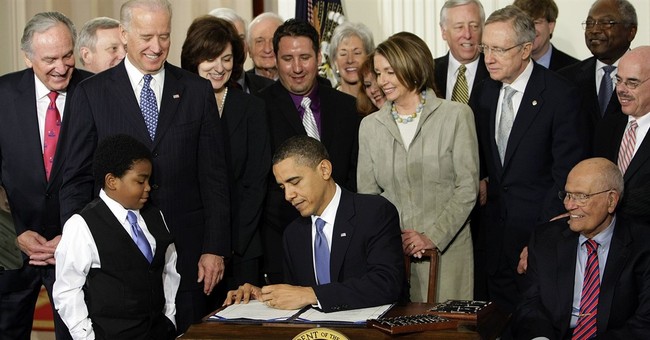 Besides Guy, The Washington Free Beacon’s Ali Meyer has been another historian charting the decline of President Obama’s health care law, noting that earlier this month—New Jersey’s Obamacare co-op collapsed. That leaves only six out of the original 23 co-ops left functioning:

Health Republic Insurance of New Jersey is folding after the state’s insurance commissioner put the Obamacare co-op in “rehabilitation” due to its hazardous financial condition.

The co-op had a liability of $46.3 million under the Affordable Care Act’s risk adjustment program, according to the New Jersey Department of Banking and Insurance. That program was designed to transfer money between insurers in case one insurer had more costly enrollees

“Despite our hard work and growing customer base, the unfortunate necessity for complying with the [Affordable Care Act’s] risk adjustment mandate has put the company under considerable financial strain,” said Tom Dwyer, the co-op’s CEO.

Throughout the summer, the law has seen nothing but bad news. Health care insurance providers began to pull out of the market, premiums were expected to soar into the double-digits, and the co-op network could collapse altogether by the end of this year. Yes, six remain, but the whole system is on the verge of total catastrophe. Americans have started to pay the penalty to remain uninsured since it’s more economical. In fact, Meyer noted that 8.1 million taxpayers decided to go that route and cough up $1.7 billion in penalties to Uncle Sam in 2014:

Nearly 8.1 million taxpayers paid $1,694,088,000 in Obamacare penalties for not having health insurance in 2014, the first year the penalty was in effect, according to the most recent data from the Internal Revenue Service.

“Beginning in 2014, the Affordable Care Act required that individuals must have had health care coverage, qualified for a health coverage exemption, or made a shared responsibility payment with a tax return,” the IRS said. “A health care individual responsibility payment was made on 8.1 million returns for $1.7 billion, an average of $210 per tax return paying this penalty.”