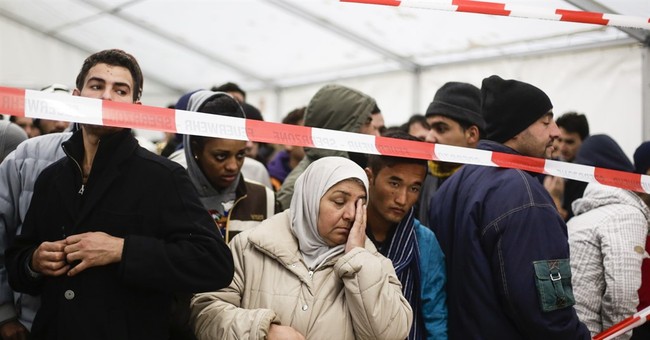 We have 10,000 Syrian refugees in the United States. Department of Homeland Security Secretary Jeh Johnson issues temporary protective status to 8,000 Syrians, meaning that they’re eligible for permanent residency applications and work permits. That order also applied to Syrians who had over stayed their visas or entered the country illegally over the past four years. Resettling Syrian refugees has become a topic of concern within our national security policy, as ISIS is spreading “like a cancer” by blending in with these roving bands of migrants. Now, to make us all feel better, a DHS memo says that faking refugee status is quite easy to do, according to The Washington Times’ Stephan Dinan.

Refugee fraud is “easy to commit” and much tougher to detect, Homeland Security officials acknowledged in an internal memo made public by members of Congress Thursday that challenges the department’s own assurances as it seeks to increase the number of refugees from dangerous countries.

The U.S. has relaxed requirements for refugees to prove they are who they say they are, and at times may rely solely on testimony. That makes it easier for bogus applicants to conspire to get approved, according to the department memo, which was obtained by the House Judiciary and Oversight committees.

Refugee fraud is easy to commit, yet not easy to investigate,” the undated memo says.

The memo said there are clear instances where “bad actors … have exploited this program,” gaining a foothold in the U.S. through bogus refugee claims.

The revelation comes just a week after the administration said it was boosting the number of refugees it wants to accept next year to 110,000, up from 85,000 this year. Officials also said they’ll take more Syrians than the 12,000 they’ve accepted so far this year — and they are on pace to resettle as many as 30,000 in 2017.

“I have never seen this document before,” ICE Director Sarah Saldana said when shown the memo by Mr. Chaffetz at a hearing Thursday.

The FBI has admitted that there is no way to fully screen every refugee for ties to terrorism that enters the country. Former DHS Secretary Tom Ridge also conceded that we couldn’t vet every one of them. A majority of governors have symbolically said that they would not accept resettlement of these migrants within their state borders, citing security concerns. Texas tried to bar resettling these people by filing a lawsuit with the federal government; it was tossed out in court. Contrary to Obama and the Democrats, these concerns Republicans are bringing up are nothing to laugh at—and even some liberal bloggers have noted that their blasé attitude and mockery of the security question makes them look horrifically out of touch with most Americans. Keep in mind this issue gained attention after ISIS executed a terrorist attack in Paris, killing over 120 people. We just had a string of bombings in New York and New Jersey and an unrelated stabbing attack in a Minnesota mall, which ISIS has claimed responsibility. This new development is quite unsettling.