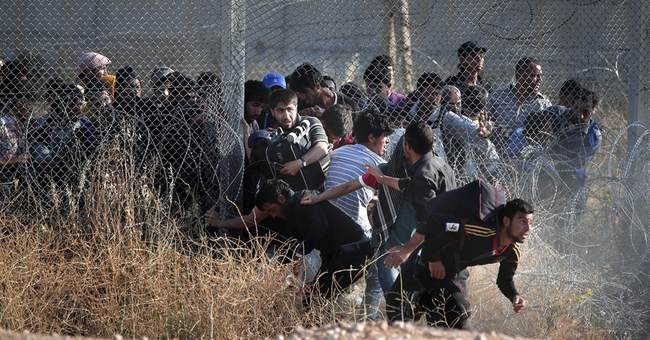 The Department of Homeland Security is granting some 8,000 Syrian refugees temporary amnesty, according to The Washington Times. DHS Secretary Jeh Johnson said that if these refugees are in the country as of Monday—they’re eligible to permanent resident status, work permits, and other documents that would allow these migrants to remain without fear of deportation This amnesty also applies to Syrian refugees that may have entered the country illegally:

Secretary Jeh Johnson issued “temporary protected status” to Syrians, saying that if they are in the U.S. as of Monday and continue to reside here permanently, they can apply for work permits and other documents to remain and live in the U.S. without fear of being ousted.

His order applies to some 5,800 Syrians who were granted status under the original 2012 TPS program, and 2,500 new arrivals who don’t have a more permanent status here.

“Syria’s lengthy civil conflict has resulted in high levels of food insecurity, limited access to water and medical care, and massive destruction of Syria’s infrastructure. Attacks against civilians, the use of chemical weapons and irregular warfare tactics, as well as forced conscription and use of child soldiers have intensified the humanitarian crisis,” Mr. Johnson said in announcing the new program.

Those eligible for TPS include any Syrian illegal immigrants who have managed to sneak into or remain in the U.S. beyond their visa expirations over the last four years.

Joe wrote earlier today that 2,340 refugees were admitted in July, bringing the total number accepted into the country to a little over 7,500. President Obama promised to resettle 10,000 such refugees last year. The Washington Times added that TPS order run for 18 months. It expires on March 31, 2018. One of the issues regarding the Syrian refugee crisis is the notion that ISIS will embed themselves with these migrants. There's also the issue of crime and the challenges of cultural assimilation. Norway has to offer seminars to tell Muslim men that rape is not legal or acceptable in the country. In England and Wales, The UK Express reported that around 900 Syrians were arrested in a year for a laundry lis of crimes, some of which included rape and child abuse. The crime issue arose last New Years' Eve when migrants sexually assaulted some 500 women in Cologne, Germany.