After The Dust Settles, Sanders Says He'll Return to The Senate As An Independent 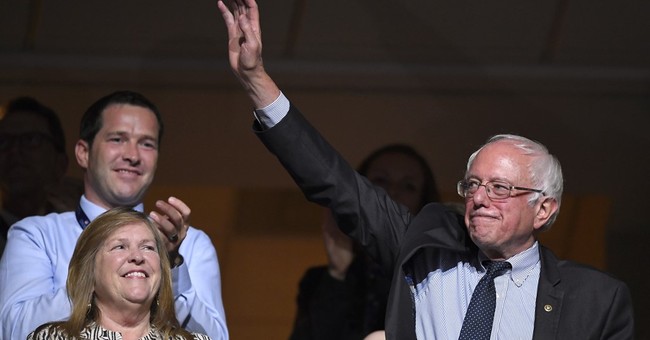 See ya! That’s what Sen. Bernie Sanders is saying to the Democratic Party after a mere 24 hours after losing the nomination to Hillary Clinton. Sen. Sanders has been an Independent for pretty much the entire duration of his career in public life, though he said he was a Democrat for the primaries last November. For a man who made all these grand gestures at the convention for unity, who suspended the rules so that Clinton could be nominated nearly unanimously by a voice vote, this is sort of a smoke signal to his progressive coalition that maybe they should do the same. In fact, many are already disgusted with the Democratic Party over the latest email flap, where Wikileaks released a trough of emails detailing how staffers at the Democratic National committee worked behind the scenes to undermine Sanders’ candidacy. They were released right before the Democratic Convention and tempers flared on the first day.

Yet, Emily Zanotti of Heat Street, who first reported on the story, noted that—and the postulation that maybe Rep. Debbie Wasserman Schultz (D-FL), the outgoing DNC chair who resigned due to the emails, did her job by allowing Clinton to win, even with the covert ops that were discussed in the emails against Sanders:

Bernie Sanders tells @bpolitics breakfast w/reporters he'll return to the Senate as an Independent, not a Dem: 'I was elected as an Ind.'

If Wasserman Schultz’s job was to ensure that a Democrat got the Democratic party nomination, then she might have been doing her job correctly (even if Bernie’s supporters would disagree).

There’s the additional complication, of course, that Wasserman Schultz was a vocal Clinton supporter, a Clinton surrogate and is now a senior adviser to the campaign, as she’s been officially booted from her DNC duties. But if anyone is vindicating her position, it’s Sanders, dumping the Democratic Party as soon as it was no longer useful.

To some extent, yeah—a Democrat should win the Democratic nomination. The “Bernie’s not really a Democrat” line of attack was used rarely by Clinton on the campaign trail, though she could’ve used it after the southern primaries gave her a significant edge in the delegates count—and definitely could’ve launched that missile at Sanders after the Acela Corridor bloodbath. But she didn’t. Nevertheless, Sanders plans to return to the Senate as an Independent. So, is this a subtle way of pulling a reverse Ted Cruz? Ted refused to endorse Trump at the Republican National Convention, with a bizarre call for party unity, but also vote your conscience—a not so subtle way to say screw you, Donald Trump. Sanders called on his supporters to endorse Clinton in Philadelphia, which was marked by boos. He made the gesture for unity again at the roll call vote, but soon made a mad dash towards the exit, which could be viewed as his final moments as a member of the Democratic Party.

I lost so I’m taking my ball home because the Democrats are too centrist. That seems to be the mindset of Sanders supporters right now. As for the Republicans, I’m sure many Never Trump folks would agree that Reince Priebus should’ve engaged in similar covert, and despicable, behind the scenes politicking to defeat Donald Trump, who is also not a Republican in the traditional sense. The only difference is that a) Trump won the nomination; and b) there were 10-15 (depending on whether you’re counting the ones who dropped out before Iowa) candidates who could’ve stopped Trump, but didn’t. At any rate, would the Republicans want to have the chaos that’s engulfing the Democrats right now? Chants in the hall, people climbing over barricades, and the media rambling about Republican disunity—that’s not worth the headache. Compared to Philadelphia, Cleveland was a cakewalk with the fight over the adoption of the rules lasting less than an hour. Intense—yes, but brief. And there weren’t massive delegate walkouts either.

Frankly, I think we can all agree that the party apparatuses should just stick to being referees. Don’t pull a Debbie.

Sanders has caucus with the Democrats since he entered the Senate back in 2007.