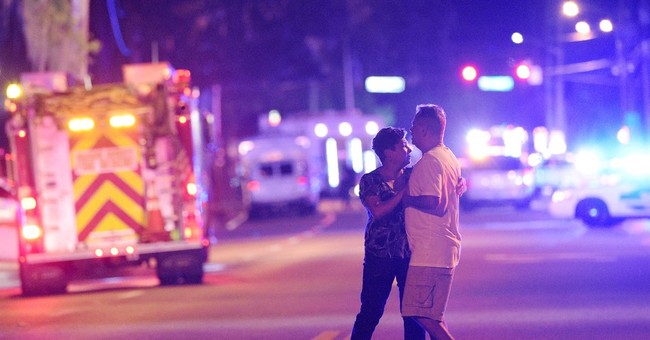 Democrats think the Orlando attack was due to access to guns, progressives whine about the role of so-called toxic masculinity, and then we have Black Lives Matter saying the shooting was due to white supremacy and capitalism. Katherine Timpf of National Review had the scoop. Here’s the BLM statement:

To honor our dead, and fight like hell for the living, we need a new vision for safety that prioritizes human rights and does not facilitate deadly violence. We need a world that realizes that the word “terrorist” is not synonymous with Muslim, any more than “criminal” is synonymous with Black. The enemy is now and has always been the four threats of white supremacy, patriarchy, capitalism, and militarism. These forces and not Islam create terrorism. These forces, and not queerness, create homophobia. These forces unleash destruction primarily on those who are Trans, and queer, and brown and Black, and we are the first to experience its’ violence. These forces create the conditions for our dehumanization and our death, and we will hold them to account, no matter whose face they may wear.

For some of the victims, like Juan Ramon Guerrero, 22, Eric Ivan Ortiz-Rivera, 36 Peter O. Gonzalez-Cruz, 22; BLM addressed them, saying “we will not allow a false narrative of “Islamic terrorism” to be dictated by white supremacists and corporate media. We know it was bullets and bigotry that killed you.”

Yeah, this is quite off the rails, but I’ll let Timpf take it from here:

That’s right — the shooter pledged allegiance to a radical Islamic terror group while committing the murders, and yet his actions so clearly have to do with an economic system.

So, basically, what they’re saying is that this guy had his “spirit” deformed by the existence of a competitive market system in the country that we live in, and that that caused him to murder 49 people in cold blood. Makes sense. I guess there must also be some huge focus on Western capitalist values in all of those terror-stricken areas of the Middle East that I’m unaware of. After all, BLM’s explanation of those values being responsible for such attacks — even when the attacker himself explains it as an act of radical Islamic terror — just makes so, so, so much sense.

It’s almost as if these folks are just trying to be contrarian for their own sake. The shooter pledged allegiance to ISIS. Within the given context of this attack, Islam is also viciously homophobic. Half of British Muslims think homosexuality should be illegal. Is that due to patriarchy, market forces, racism, or militarism? I don’t think so. It seems pretty clear that radical Islam had a part to play, despite federal authorities acting ridiculous in their efforts to mitigate that factor, whether it be redacting the 911 transcript between killer Omar Mateen and the Orlando Police Department, or our own attorney general saying that we may never know the motive despite survivors saying he was killing people so the U.S. would stop bombing his country and attacking ISIS. Oh, and he pledged allegiance to ISIS during the shooting.