Loretta Lynch to White House: Take Me Off The SCOTUS List 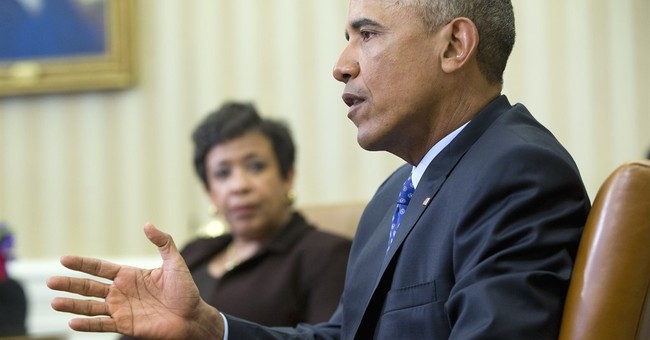 If the interview with Fox News’ Bret Baier after Super Tuesday wasn’t a good enough hint, then Attorney General Loretta Lynch made it official last night: she doesn’t want to be on the Supreme Court (via Politico):

Attorney General Loretta Lynch has asked the White House not to consider her for the Supreme Court vacancy created by the death last month of Justice Antonin Scalia, a Justice Department spokeswoman said Tuesday.

"As the conversation around the Supreme Court vacancy progressed, the Attorney General determined that the limitations inherent in the nomination process would curtail her effectiveness in her current role. Given the urgent issues before the Department of Justice, she asked not to be considered for the position," Justice spokeswoman Melanie Newman said in a statement.

Lynch did say to Baier that she liked her job at the Department of Justice. Yesterday evening, at Tina Brown’s Women in the World event in Washington D.C., the attorney general again reiterated her previous statement about the nomination and the impact it would have on her current role as serving as the nation’s chief legal authority and prosecutor:

“What a tremendous honor it was to be thought of for a position such as the Supreme Court, and how grateful I was for the outpouring of support, thoughts and well wishes of people that I spoke to about this as I traveled the country and as I did my work here. The nomination process has challenges, not that it wasn’t just delightful when I went through it— and I’m sure it would have been again— but the nomination process has inherent limitations on what you can and can’t do, particularly when you’re in a policy position. I love this job, I am so fulfilled by what I am doing. There’s so much that I want to push through and cross that goal line before the end of this administration. I’m committed to staying in the Attorney General position and doing that job to the best of my ability.”

JUST IN: Attorney General Lynch asks White House to take her out of any consideration for SCOTUS - @ABCPolitics pic.twitter.com/Vl0nWmuaQk

Prior to her formal rejection of wanting to be the next Supreme Court nominee, SCOTUSblog had an interesting post about President Obama picking Lynch to replace the vacancy left by Justice Antonin Scalia. What would have been a historic nomination could have moved Senate Republicans from their entrenched position of holding no hearings for an Obama nominee; they don’t have a good reason since she’s been thoroughly vetted. Moreover, it could have galvanized black and female voters, which lean Democratic in presidential years–general election maneuvering by proxy in this instance. The Obama White House probably would have salivated over how the media would rehash the racial element with a hypothetical Lynch nomination and subsequent Republican resistance; “it was unprecedented obstruction, but now it’s racially-based” would have been all over the left wing blogosphere.

Still, another reason for the avoiding the SCOTUS question; she probably would have gone down on a party line vote, so I can see why Lynch saw that whole notion as a fool’s errand. In fact, other politicians from Nevada Republican Gov. Brian Sandoval to New Jersey Sen. Cory Booker–they’re opting out of Obama SCOTUS list. It’s simply not worth going through the public spotlight, and the Senate Republicans, just to have your nomination torpedoed. For Sandoval, it was probably a mixture of not wanting to deal with the politics of it all, along with the fact that he didn’t want to be used as troll bait to his own party. Moreover, Sandoval is a moderate Republicans it’s far from what Obama really wants which is presumably have a nominee who would shift the Court to the left. As the Washington Post reported, some on the right are thinking the president is looking for a reliable liberal candidate, who is also a sitting judge. But others feel the president knows that a suicide mission for a Supreme Court nomination isn’t smart, nor is it fair to the person who would ostensibly be lit up by the senate majority, which is why he’s looking for a qualified non-ideological justice to get things going–or at least force the GOP to the negotiating table.

Some watchers of previous Supreme Court confirmation fights have speculated that the president might prefer to select a recognized liberal who could excite Democratic voters in an election year.

But those familiar with the thinking of White House officials said Obama is disinclined to name an outspoken progressive as a probable sacrificial lamb. Instead, they said, the White House thinks it may be able to apply the greatest pressure on resistant Republican senators by choosing a highly qualified federal judge regarded as moderate and non-ideological.

Even one of the moderate candidates, administration officials think, could significantly shift the balance of the court after Scalia, the outspoken anchor of the court’s conservative wing for three decades.

Conservative veterans of Supreme Court nomination fights reject the idea that Obama is preparing to nominate someone without ideology. “What Obama is trying to do is find someone he knows will be a very reliable liberal voice on the court. But he’s going to present them as if they were moderate,” said Carrie Severino, chief counsel for the Judicial Crisis Network…

As the White House’s vetting process unfolds, they will probably find other facts that are significantly less convenient. For example, when Kelly worked as a public defender she helped secure a plea deal for one Casey Frederiksen, a convicted child predator. Frederiksen was convicted of sexually abusing and

murdering Evelyn Miller, the 5-year-old daughter of his partner, who was also the mother of his two sons. As part of that murder investigation it was discovered that Frederiksen had more than a thousand images and videos of children engaging in sex acts, some with adults. He was charged federally with twelve counts of receiving child pornography and two counts of possessing child pornography. Kelly represented Frederiksen in the child

According to a 2005 story in the Des Moines Register, shortly after Frederiksen was indicted, Kelly “argued her client was not a threat to society,” an odd assertion to make on behalf of a man who had previously been convicted of sexually molesting a different girl.

Editor's Notes (Matt): The original post said that Lynch had attended Tina Brown's Woman in the World Event, but also referenced her publication, The Daily Beast. It was just Brown's event, her publication was not involved. The post has been updated to reflect the changes.