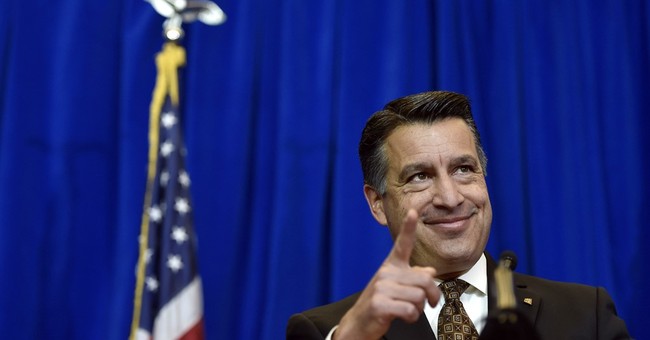 News broke that Nevada Republican Gov. Brian Sandoval was being considered by the Obama White House to fill the vacancy left by Justice Antonin Scalia. Sandoval could’ve forced the GOP to move on hearings. Sandoval leans to the left of issues, like abortion, but could have hit some bumps with Democrats since he’s not big labor’s best friend. It’s irrelevant now; Sandoval took himself out of consideration (via ABC News):

Nevada Gov. Brian Sandoval has taken himself out of consideration as a possible Supreme Court nominee to replace the late Justice Antonin Scalia.

In a statement, Sandoval said “earlier today I notified the White House that I do not wish to be considered at this time for possible nomination to the Supreme Court of the United States.”

“I have also spoken to Senators Reid, Heller and McConnell and expressed the same desire to them,” the Republican governor said of fellow Nevadans Minority Leader Harry Reid and Sen. Dean Heller, and Majority Leader Mitch McConnell of Kentucky. “The notion of being considered for a seat on the highest court in the land is beyond humbling and I am incredibly grateful to have been mentioned.”

Yet, we may have dodged a bullet with Sandoval, as John Fund noted in National Review. He described the nomination as Obama’s Trojan horse to Republicans:

“There’s way more opposition to the governor within the Republican legislative caucus than the Democratic one,” David Damore, a professor of political science at the University of Nevada at Las Vegas, told Politico.

“He has been a consistent barrier to reform measures in Nevada,” one state legislator told me. “We asked him during his first term in 2012 why he couldn’t be more like Scott Walker, and he pointed to the Democratic legislature and said things would be different if the GOP had a majority. Well, in 2014 we gave him a majority in both houses for the first time since the Great Depression and he went to war with conservatives.”

A prime example is tort reform, an area where Sandoval has given lip service to supporting reform. But as governor he vetoed bills limiting punitive damages in civil cases and limiting the inclusion of third parties in product-liability lawsuits. Moreover, his judicial appointments have been lackluster, and one of his appointments to the new state court of appeals had a clear liberal track record and was a former staffer for Harry Reid.

On taxes, he has been the moving force behind the largest tax increase in Nevada’s history. In 2014, a stunning 79 percent of Silver State voters rejected a gross-receipts tax applying to business with over $1 million in revenue. Sandoval didn’t back the tax, but as soon as he won reelection that year, he proposed a similar tax with a threshold of $4 million in business revenue and rammed it though the legislature. “He traded away every kind of conservative reform measure on the table in order to get Democratic votes to pass his billion-dollar-plus tax increase,” conservative activist Chuck Muth told me. And Sandoval made clear to GOP legislative leaders that he wouldn’t sign bills that included popular measures to require voter ID at the polls or collective-bargaining reform for state employees. In 2013, he signed a bill allowing undocumented aliens to obtain a driver’s license.

Nor does the governor’s conservative apostasy end there. Sandoval is the only GOP governor who both expanded Medicaid in his state and set up a federal health-care exchange. (John Kasich famously expanded Medicaid but balked at an exchange.)

So, Pandora’s box won’t be opened. Even vulnerable Senate Republicans this year are lining up behind the Republican leadership in their position of letting the next president pick Scalia’s successor. Sens. Kelly Ayotte (R-NH) and Rob Portman (R-OH) are set to fight for their political lives this November, but both announced their intention not to meet with an Obama Supreme Court nominee yesterday.

The Obama White House was probably angling on softening the GOP with this centrist Republican in order to announce his true nominee, which some say would be Attorney General Loretta Lynch. Lynch would be the first black woman nominated to the Court, and could energize women and black voters who usually turn out in droves for Democrats in the general. There’s also no reason to refuse holding hearings*, or delay a vote, for Lynch since she’s already been heavily vetted. Her nomination would probably be voted down on a party line vote, but the damage would already be done. Republican voters would enjoy seeing the Senate hold the line, but they’re going to be pilloried by the media**. Plus, Democrats would surely play the race card in an election year where voter demographics break to the left. In short, Lynch goes down, but that defeat paves the way for an energized liberal base to turnout–and allows a Democratic president, with a possible Senate majority, to pick Lynch again, or another hard core liberal, to replace Scalia. The chances of that happening increase greatly if Trump clinches the Republican nomination.

So, while the GOP digs in, they should at least entertain a quiet debate as to what the political climate is going to look like a few months from now, especially if it looks as if Hillary is going to smoke the GOP in the general. Do they entertain whomever Obama has selected that sits at the center of the gimbal politically? Do they roll the dice on a centrist deciding the future of government regulations, gun rights, abortion, and other issues that rank high with conservatives? It’s a lesser of two evils situation; one the GOP might have to entertain.