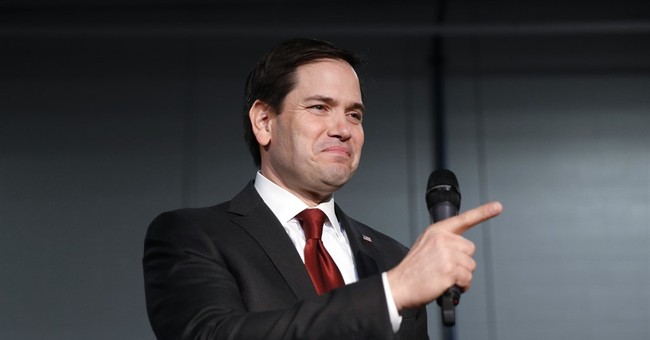 CNN’s MJ Lee reported that the Rubio campaign could be preparing for a contested convention as a secondary protocol to prevent Donald Trump from winning the nomination come July. A top Rubio aide offered a blueprint Wednesday night in Manhattan:

As Rubio scrambles for support ahead of Super Tuesday, Terry Sullivan, Rubio's top adviser, used a Power Point presentation and took questions from attendees to lay out the two courses that Rubio's quest for the GOP nomination could take in the coming months, two people present told CNN, speaking anonymously to share details from a private meeting.

The first showed the number of states and delegates Rubio would need to clinch the nomination outright before July's convention. The second was the scenario in which none of the candidates gain the simple majority delegates needed to clinch the nomination before the convention, unleashing a messy and potentially unpredictable battle where multiple candidates are vying for the title.

The meeting comes as Rubio is trying to lock up the support of establishment Republicans looking for an alternative to Trump and Cruz. The Rubio campaign needs to convince donors and GOP power brokers that it has a true path to victory. Trump is heading into Super Tuesday as the undisputed GOP front-runner, having won New Hampshire, South Carolina and Nevada, and Rubio has not yet won a state.

Sullivan has acknowledged in the past that a brokered convention might be hypothetically possible, but Wednesday's comments are a concrete indication that the campaign is preparing for such an outcome.

Philip Bump at the Washington Post reminds us that Rubio keeps losing, but so did Bill Clinton in 1992. And he won. We'll see how the Florida senator does in tonight's debate on CNN. This would be the last chance for anti-Trump candidates to get a stop on Trumpmentum.