A Most Violent Year: Baltimore Ends 2015 With The Highest Spike In Homicides In Over Two Decades 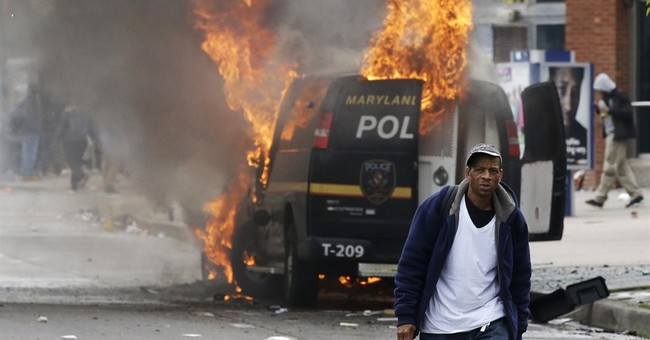 The controversial arrest and death of Freddie Gray at the hands of the Baltimore police department set off a firestorm that engulfed the city, forcing Gov. Larry Hogan to declare a state of emergency and deploy the National Guard. It led to the six police officers involved in the arrest being indicted on charges that included reckless endangerment, second-degree murder, vehicular manslaughter, misconduct in office, and gross negligence. Gray died a week after suffering a severe spinal injury while being transported in a police van.

After the riots and the indictments of the officers, three things occurred: The media and the public pummeled the police department; the police department took a less aggressive role in enforcing the law; and crime spiked in the city. Neighborhoods that had slammed the Baltimore police wanted them back on patrol to keep them safe. Baltimore hasn’t seen this many homicides in over two decades, ending 2015 with 344 of them. This is just shy of the 1993 record of 353 (via Baltimore Sun):

On a per-capita basis, the year was the deadliest ever in the city. The year's tally of 344 homicides was second only to the record 353 in 1993, when Baltimore had about 100,000 more residents.

The killings were on pace with recent years in the early months of 2015 but skyrocketed after the unrest and rioting of late April. In five of the next eight months, killings topped 30 or 40 a month. Nearly 90 percent of the year's homicides were the result of shootings, renewing calls for new gun laws. Counting nonfatal shootings, gun violence was up more than 75 percent compared to last year, with more than 900 people shot.

More than 90 percent of the homicide victims this year were boys or men, more than 90 percent were black, and more than half were between the ages of 18 and 30 — reflecting an urban reality that residents and civil rights activists say is devoid of legitimate job opportunities and caught up in the often-violent drug trade.

One of the biggest law enforcement debates of 2015, at the national level, was whether the United States was experiencing a crime wave or violent crime was merely fluctuating amid a decades-long decline. Many cities saw increases in homicides, but nowhere near historic highs.

In Baltimore, there was no such debate. Among the 30 largest U.S. cities, Baltimore's crime spike was unparalleled.

Baltimore Police Commissioner Kevin Davis hopes that 2015 is an “asterisk” year, regarding his city’s spike in homicides.

Davis was appointed to be Anthony Batts’ successor after Mayor Stephanie Rawlings-Blake fired him. While neighboring Washington D.C. had a 54 percent spike in homicides, it’s numbers weren’t nearly as high, though their police force has dropped to a ten-year low. Baltimore has had a bloody year, and a tragic year. While the pummeling of law enforcement has reached outrageous levels, the Baltimore Police Department has a sordid history of making improper arrests. So, it’s had its issues–and they’re not going to be resolved soon since the officer trials are being held separately. After three days of deliberation, the jury was unable to reach a verdict in the trial of the first officer, William G. Porter, which resulted in a mistrial. Concerning this tragic incident, Baltimore is nowhere near out of the woods yet.