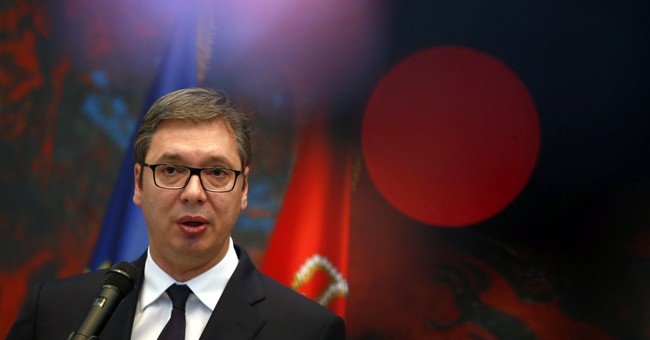 On Tuesday, Serbian President Aleksandar Vucic reportedly challenged Twitter to delete his account, as they did with former President Donald Trump's, after the social media platform labeled the accounts of numerous media outlets under his control as “state-affiliated.”

“I can’t wait for them [Twitter] to close my account so I become another Trump in the world,” Vucic told the Associated Press.

Vucic added on, slamming the social media platform for cooperating with “tycoons, thieves and criminals.” As we reported, two Taliban spokesmen currently have access to Twitter to share and spread their ideology. “It is most normal that they cooperate with the government,” Vucic reportedly said.

According to Twitter’s website, “[l]abels on state-affiliated accounts provide additional context about accounts that are controlled by certain official representatives of governments, state-affiliated media entities and individuals closely associated with those entities.” Other countries prone to this particular label on specific Twitter accounts are the United States, Russia, China, France, Turkey, and Saudi Arabia.

Reportedly, Vucic described the label as “censorship” and praised the countries who’ve received this stamp from Twitter for “spreading the freedom-loving ideas.” As of right now, the president’s account specifically appears to be in good standing with the social media platform.

As we covered in June, Twitter banned Nigerian President Muhammadu Buhari after removing one of his tweets that prohibited the Twitter Rules. In turn, the Nigerian government banned Twitter from the country. Any Nigerian citizen who tries to bypass the ban will be arrested. Twitter responded to this, calling open internet an “essential human right.”

We are deeply concerned by the blocking of Twitter in Nigeria. Access to the free and #OpenInternet is an essential human right in modern society.

We will work to restore access for all those in Nigeria who rely on Twitter to communicate and connect with the world. #KeepitOn

In a statement shared on Twitter’s official blog, the social platform explained that Trump’s tweets on January 6 and the weeks leading up to it incited the violence that occurred when protestors stormed the Capitol. In the post, Twitter stated that tweets must be read “in the context of broader events in the country” and ways in which Trump’s tweets “can be mobilized by different audiences, including to incite violence.”

“After close review of recent Tweets from the @realDonaldTrump account and the context around them — specifically how they are being received and interpreted on and off Twitter — we have permanently suspended the account due to the risk of further incitement of violence,” the post stated. “[W]e have determined that these Tweets are in violation of the Glorification of Violence Policy and the user @realDonaldTrump should be immediately permanently suspended from the service.”

If the day comes that Vucic gets booted from Twitter, he’ll be joining two other world leaders denied this “essential human right.”