GOP Rep.-Elect Has a Very Creative Way to Bypass Restrictions on Gatherings for Thanksgiving 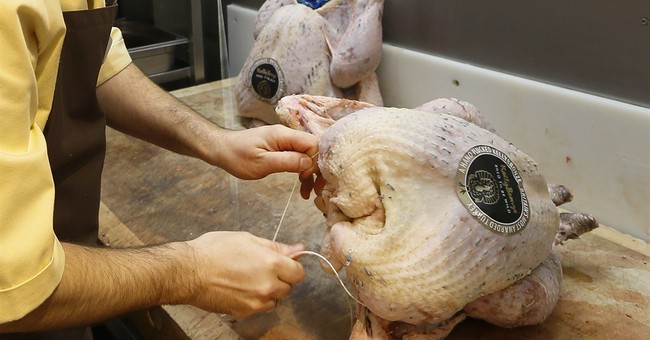 Governors across the country have placed restrictions on residents ahead of Thanksgiving in a purported effort to curb the spread of the Wuhan coronavirus. In Colorado, there’s a 10-person limit on gatherings, but GOP Rep.-elect Lauren Boebert has found a workaround.

Rather than hosting a dinner, she’s having a “funeral” for the dead turkey.

“In Colorado, Thanksgiving is limited to 10 people, but funerals are limited to 30,” she told Fox News. “So I’m going to have a peaceful funeral for a turkey and have about 30 people at my house.”

Garfield County, Colorado, where Boebert resides, is under a “Level Orange - High Risk” advisory for coronavirus. The levels are defined by new cases, the percent positivity, and the impact on hospitalizations, according to the state. This means public and private gatherings are capped at 10 people from no more than two households. There are exceptions for houses of worship, however, and funerals, baptisms, and weddings. For these, there can be no more than 25 percent of the posted occupancy limit, but the maximum number of individuals cannot exceed 50 people, which is slightly higher than Boebert’s projection.

She later joked on Twitter that she will also be holding a funeral for a pig and duck, so perhaps she’ll have more people over.

“Due to government regulations I have adjusted my Thanksgiving plans. Rather than just a funeral for a turkey, I’ll be holding one for a pig and duck as well,” she said. “That makes my guest limit about 90, right?”

Due to government regulations I have adjusted my Thanksgiving plans.

Rather than just a funeral for a turkey, I’ll be holding one for a pig and duck as well.

That makes my guest limit about 90, right?

Colorado isn’t the only state with strict restrictions in place this holiday season. In Oregon, Gov. Kate Brown said residents should report neighbors who violate her orders.

“Look, this is no different than what happens if there’s a party down the street and it’s keeping everyone awake. What do neighbors do? They call law enforcement because it’s too noisy,” the Democrat told KGW-TV on Friday. “This is just like that. It’s like a violation of a noise ordinance.”

And in Vermont, Gov. Phil Scott has ordered schools to grill students about their Thanksgiving plans to see if they celebrated with people outside their immediate family.

"We understand how difficult this is, but since we know these types of gatherings have been the cause of so many outbreaks, we've got to do all we can to slow this down," Scott said.

“From my standpoint, this is fair warning to those of you who are planning to have gatherings from outside your household for Thanksgiving,” Scott continued. “If you don’t want your kids to have to transition to remote learning and quarantine for a seven-day period, maybe you ought to make other plans.”

Students who attend a larger Thanksgiving gathering will be required to switch to remote learning for two weeks, or, they can quarantine for one week and take a COVID-19 test, which will have to be negative before than can return to school.