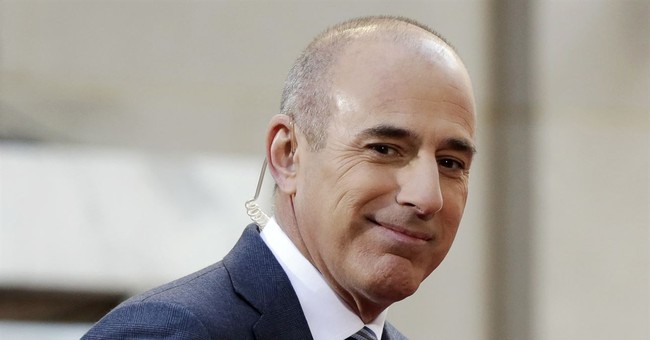 Matt Lauer, the disgraced former co-anchor of the “Today” show, is reportedly still seeking $30 million from NBC for the remainder of his contract.

Page Six reports that Lauer’s lawyers are trying to get him the rest of his $20 million-per-year-contract that, if he hadn’t been fired abruptly for “inappropriate sexual behavior in the workplace,” would have lasted another year and a half, through 2018.

A source close to Lauer’s team said, “They are currently looking at his contract and determining whether the claims against him, which clearly would affect any moral clause in his contract and his ensuing termination, would cut off his contractual rights to be paid through to the end of his contract.”

NBC in 2016 had renegotiated a new deal with Lauer valued at $20 million a year that would have kept him on the air through the end of 2018. (Page Six)

The only way he wouldn't walk away with a golden parachute is because of a moral clause in the contract that would allow the network to fire an employee without pay.

“There is no way Matt is getting paid. There has been an irrevocable breach of Matt’s contract, there is a moral clause that says if he brings the company into disrepute — which he clearly has — NBC can terminate his employment immediately without pay and they do not have to pay out his contract," a TV insider told Page Six.

Lauer was seen Thursday, the first time since his firing, meeting with prominent real estate and criminal lawyer Eddie Burke.